All About Owls: A Guide to the Silent Night Predators

There are two hundred and sixteen species of owls today. One hundred and nineteen species belong to the typical owl family, with a total of eighteen species belonging to the barn owl family. The majority of owls are nocturnal predators. Their long sharp talons and hooked bills are designed to help them catch and kill smaller prey. Their specially designed feathers combined with their light bodies and wide wings allow them to swoop down on their prey silently. From their hunting habits, the manner in which they digest their food, to their unusual behaviors, there’s no doubt that owls are fascinating creatures. Below, you’ll find a guide that’s all about owls. We’ve included many interesting facts regarding their way of life, habitat, mating behavior, and much more.

If you’d love to learn all about owls and want to try your hand at sighting these night predators, learning where they roost, what they eat, and important physical characteristics is the best place to start. Once you have become familiar with the owl’s habits and their most active times, you can plan out a day, or night, of birding that will allow you to watch these magnificent birds in action.

Keep on reading to learn more about owls based on species and location, and find out what you can expect in terms of night activity, diet, and preferred housing. 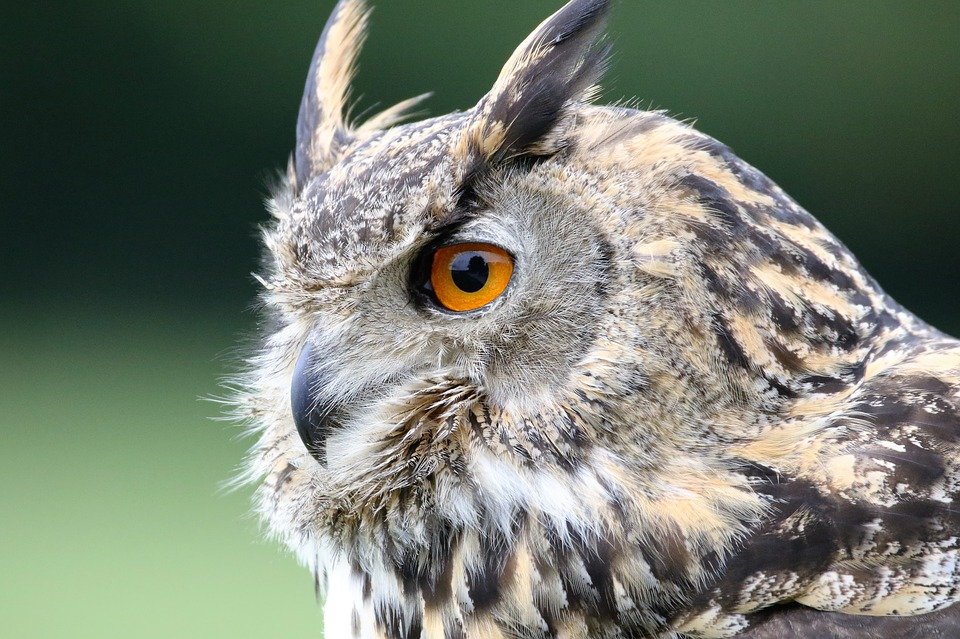 Probably the most popular owls, the species of owls that many people are familiar with reside in Maine. This includes the most well-known species, the great horned owl and the barred owl. Both species live in urban environments, open woodlands, dense forests, and other types of forested habitats.

Below our guide will focus on many popular species of owls. We’ll discuss eating and mating habits, habitats, behaviors, nesting, and more.

An owl’s main source of food will usually depend on the species of owl. As an example, the screech owl will eat mostly insects, while the barn owl will feed primarily on voles and shrews. Larger species of owls will prey on foxes, small dogs, rodents, skunks, rabbits, and more.

Yes. They have also been known to eat birds including wild turkeys, ducks, and songbirds. In certain situations, when food is scarce, they will also eat fish, amphibians, reptiles, and insects.

A Body Designed for the Hunt

Owls have excellent vision and hearing. Their vision is at its best in low light conditions. Both their hearing and vision are specifically designed to help them hunt at night. Because they have tubular eyes that are unable to move in their sockets, their heads are flexible and can rotate as much as two hundred and seventy degrees.

When hunting, the owl will use a sit and watch approach. It will wait high up on a perch and keep an eye out for any passing prey. Once sighted, the owl is able to swoop down and seize it using their needle-sharp talons. 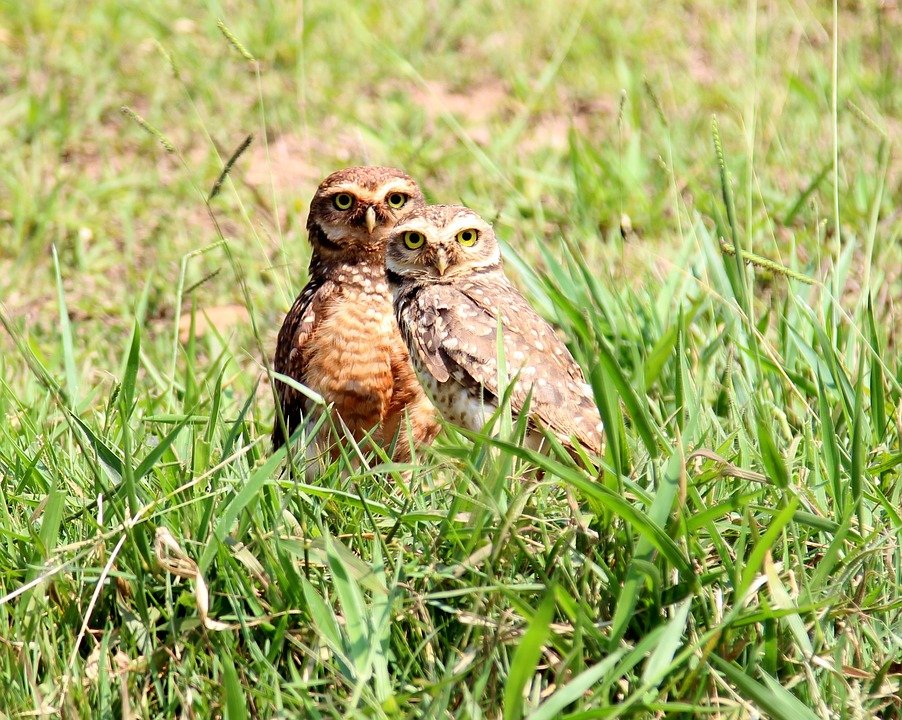 The mating season for the owl will also depend on the species. As an example, the great horned owl is one of the earliest nesting birds. Pairs of owls will begin to form during the second or third week of January up to the middle of March. The male will choose the nesting site and try to attract a mate by hooting frequently.

The female owl will incubate up to three eggs for a period of thirty to thirty-five days. The male owl will guard their young and provide the food.

Young owls will remain in their next for approximately five to six weeks, after which they will venture out and begin climbing onto nearby branches. At seven weeks of age, the young owl will begin taking short flights. They will be able to fly at around two months of age.

During this time, both parents will take turns tending to and feeding their young for several months.

The owl’s nest is typically located in the tallest trees they can find. If a suitable tree cannot be found then an owl may use a hayloft, power-line towers, or even rock ledges.

Owls will rarely use the same nest twice because their young often end up destroying the nest. Owls are not known to make an effort to repair or construct an elaborate nest and often end up using a nest that other large birds created the previous season. 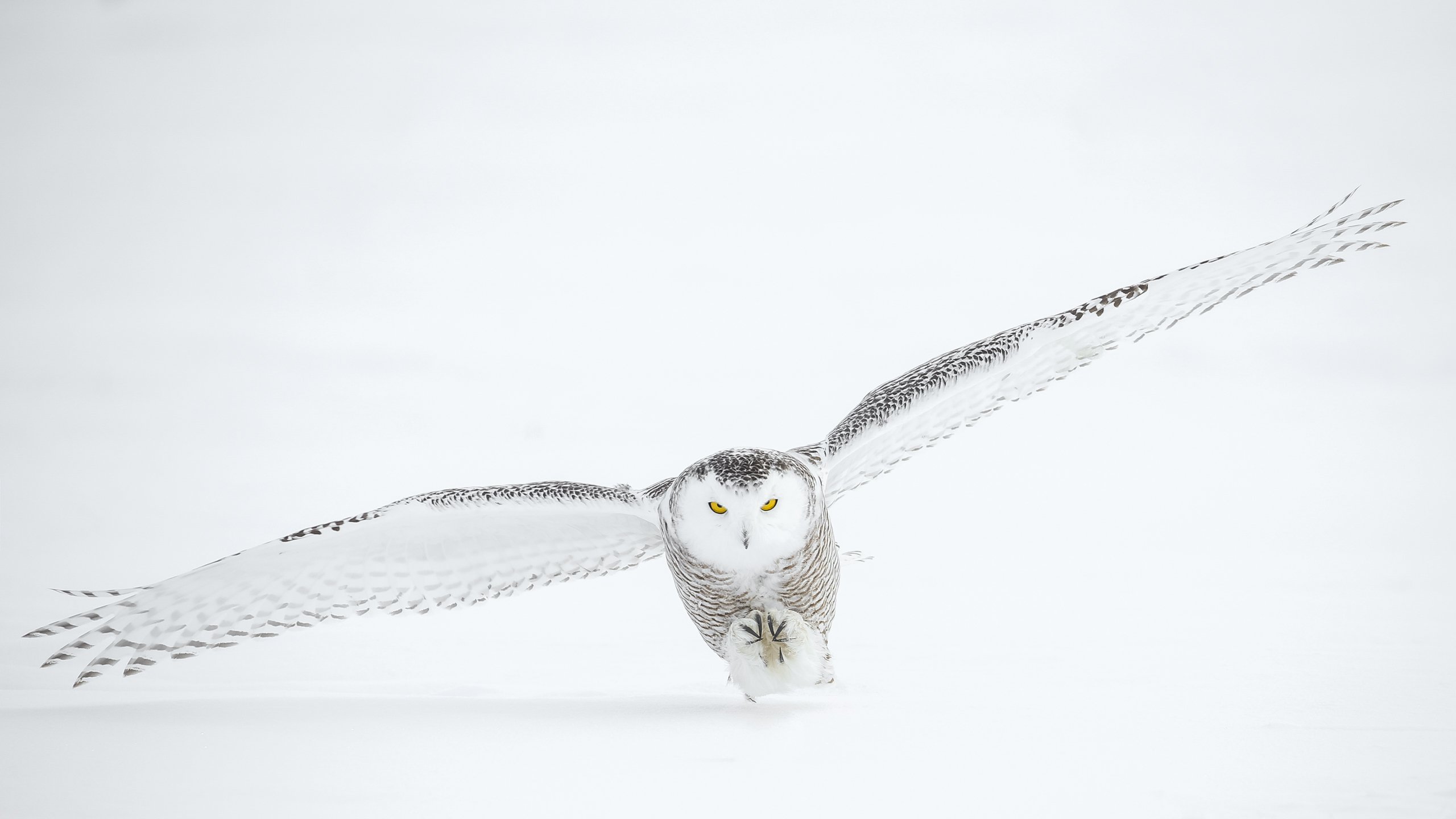 An adult owl can be seriously injured or killed when attacking prey or feeding on roadkill. Approximately half the population of young owls that leave the nest will die within the first twelve months from vehicle collisions, attacking prey, or starvation. While a captive owl can live up to thirty years, the oldest banded wild owl was recorded at just thirteen years of age.

Below we’ll go over some of the most well-known species of owls and discuss their characteristics and behaviors. Each owl is fascinating in their own way, although many share the same behaviors, diet, and hunting practices.

The great horned owl is easy to identify due to its horns, which is really just large tufts of feathers. The great horned owl is also commonly referred to as the cat owl because the tufts of feathers also look like the ears on a cat. This species of owl has a forty-eight-inch wingspan and measures in at twenty inches tall. Dark brown in color, the underside of the owl is a light brown with deep brown bars. 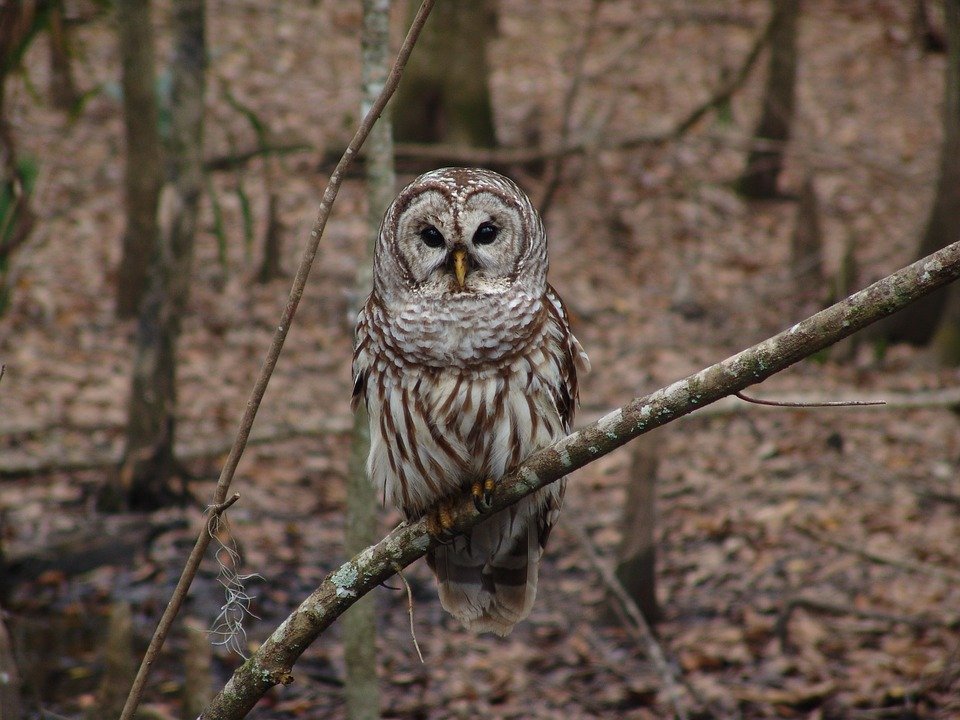 Much smaller than the horned owl is the barred owl, another common species most people are familiar with. Additionally, instead of the golden eyes of the great horned owl, the barred owl has dark brown eyes. It also lacks the cute tufts of feathers at the ears and has a much thicker neck. The back and neck of are also barred crosswise. This species of owl prefers foraging in swamps that are adjacent to open meadows.

The barn owl can easily be identified by its heart-shaped, white face, dark eyes, white underparts, and golden plumage. It has an impressive wingspan of thirty-nine inches with very long legs that allow it to stand twenty inches tall. These owls prefer to prey on rodents, which is how it earned its name. The barn own prefers to nest in sheds, silos, and of course, barns.

This small owl features a twenty-inch wingspan and stands just ten inches tall. The adult screech owl is gray or dark brown and has very small tufts of feathers at the ears. It prefers to nest in the cavities of trees but has also been known to use nesting boxes. They enjoy spending time near water sources and dine on large insects, fish, small birds, and rodents.

What is an Owl Pellet?

The owl pellet consists of a clump of feathers, bone, and fur. It’s the indigestible remains of the owl’s food. The owl swallows their prey whole and is only able to digest the fleshy parts. What they cannot digest they regurgitate as a small casting or compact pellet. To learn more interesting facts regarding these nocturnal predators, click here to read our nocturnal birds list.

What Binoculars Should I Use to Sight Owls?

The best birding binoculars can easily help you sight owls during dusk or dawn. If you’re looking for a pair that works well in a variety of light conditions, we recommend the Celestron 71336 Nature DX 12×56 Binoculars.

With bodies that allow them to silently swoop down on their prey and eyesight and hearing that allows them to locate even the smallest mammal, the owl is the silent predator of the night. We hope our guide all about owls has helped you learn more about these unique and interesting birds of the night.

Where Do Birds Go At Night in the Winter?