As graceful aviators, the American Golden Plovers travel across both Americans in its migration. These birds are elegant and a sight to behold when you spot them. Among all the shorebirds, these might be the fastest which helps them with their long journey from the northern coasts of Canada and Alaska all the way down to the southern parts of South America. In that journey, they make multiple stops at which you can enjoy their company and take a beautiful picture.

If you’re looking for a great birdwatching spotting scope, make sure you check my full guide on that topic! Now, let’s start with the overall description of the American Golden Plover…

These plovers are medium-sized shorebirds that breed on the rocky northern shores of our continent. They have relatively long legs, a short neck, and an equally short bill. Their heads are large, rounded, and quite distinctive thanks to the white crown-like plumage. When they’re in their breeding colors, they have a black face, neck, and underside. The younger golden plovers are much brighter in their colors and have a specific pale stripe above their eyebrows. Their heads are smaller and have light-brown underpants.

Size-wise, these plovers are 9-11 inches long, weigh around 4-7 oz, and have a wingspan of up to 26.5 inches. You can put them between a robin and a crow for reference in terms of their overall size.

While plovers love all sorts of food, the American variant specifically prefers aquatic invertebrates. They also love eating certain types of leaves, seeds, and of course – berries. Their behavior when it comes to food is similar to other types of birds in their family. They walk a few steps and then peck the ground if they find something interesting or edible. In their breeding grounds, they also feed on insects such as beetles, flies, or even whole snails. When they’re migrating through the open fields, they also include grasshoppers and caterpillars in their diet. Mollusks found around shores are also a favorite snack.

Another place you can find this golden plover is in shallow estuaries, beaches, or even mudflats where they will scout for all sorts of invertebrates. 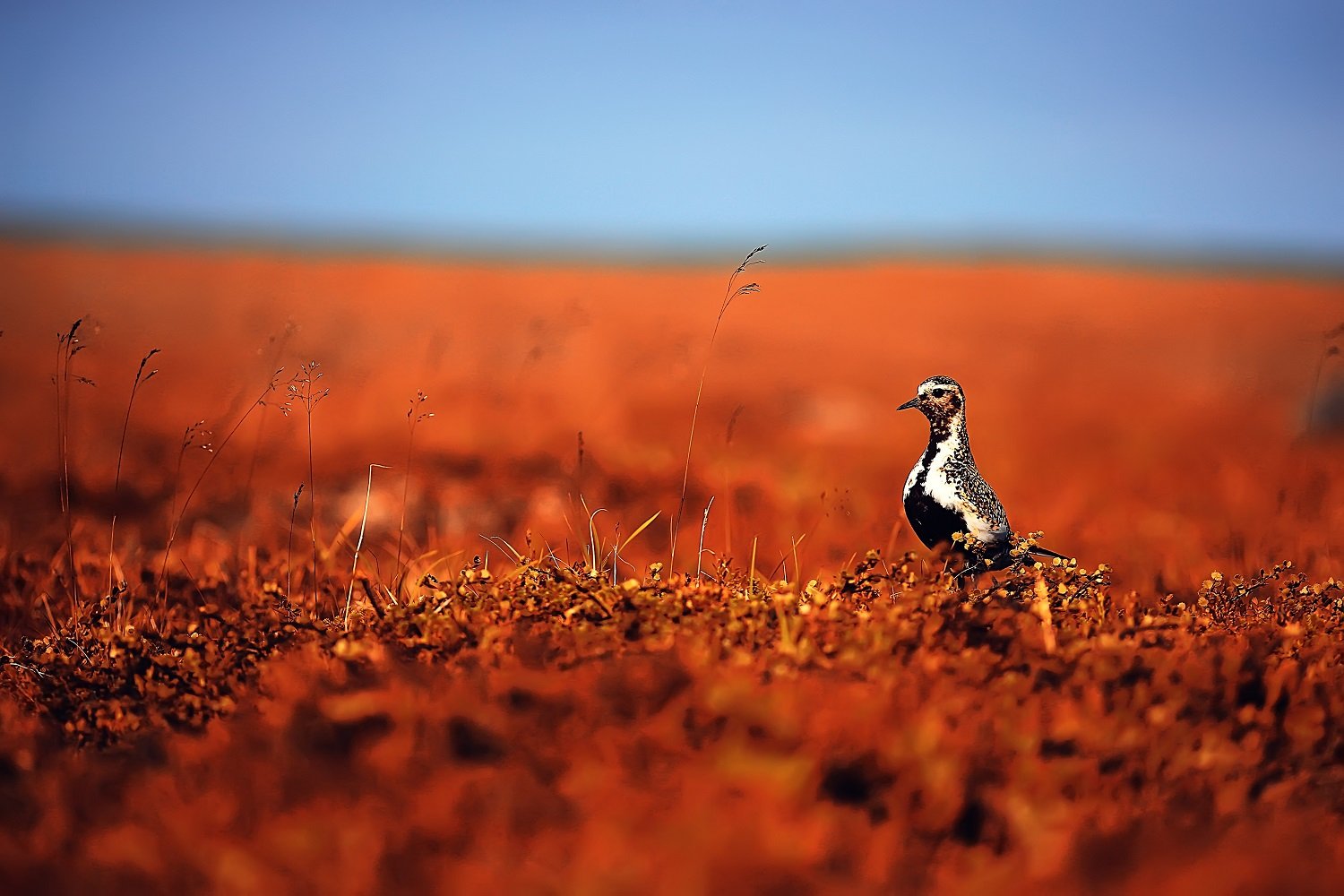 The main habitat of these plovers is the North part of North America. More specifically, they prefer the northern shores of Canada and Alaska. There, they spend half of their time, with the other half spent migrating to the south and visiting various plains and tundras along the way. During their migration, these birds will go through the heart of the continent. That includes the Great Plains and the Valley of the Mississippi River. Unlike their coastal behavior, in the plains, they will forage far from bodies of water.

Differences between American and other Golden Plovers

The American plover is quite similar to its Pacific and European cousins. It is smaller, however, as well as slimmer. Compared to the European plover, it also has longer legs and darker armpit feathers. Pacific plovers can often be smaller than the American ones but with even longer legs. Their plumage is a bit brighter and has a yellower back.

For an in-depth guide to bird identification, make sure you visit my fully detailed article on that topic!

When it comes to nesting, there are quite a lot of interesting behaviors and facts about the golden plovers in general. The male first displays its flight capabilities high above the breeding grounds. They perform slow and strong beats with their wings with a continuous call, which is very memorable. When trying to seal the deal, males will crouch, have their neck forward and their tail raised.

The nest themselves are located deep into the dry tundras and on the ground. They are built by the male birds. A common place that they prefer to use is a slight depression in the tundra, preferably with lichens, grass, moss, or leaves around.

In terms of the number of eggs laid, they are most commonly 3 per nest. The eggs have a cinnamon color to them with bold black spots. They camouflage well against the surrounding vegetation in the tundra. Both parents take care of the incubation which takes around a month.

The young hatchlings leave the nest very early, which is quite uncommon in the bird world. While both parents will take care of the chicks, they will also start looking for food on their own from very early on. Their first flights usually occur in the fourth week.

In terms of identification, there are quite a lot of differences between the different members of the American golden plover family. Let’s discuss each of those now:

Breeding adults also have a three-parted whistle which is distinctive. What is not so distinctive, though, is their quick up-and-down bobbing while running. In their habitat, these birds sit upright and are easy to identify thanks to the white crown and short bill.

The young ones are similar to adults in their winter form but have a light barring on their chests, flanks, and sides. Their yellow edges are more distinct, just like the rest of the spots on their wings and crown.

Some of the most curious facts about these birds are:

How long do Golden Plovers live?

Golden Plovers live quite a long life compared to other similar birds. There have been golden plovers captured in Alaska that have been dated to at least 13 years of age.

Does the American Golden Plover migrate to Hawaii?

Unlike the Pacific Golden Plover, the American one doesn’t migrate to Hawaii.

As one of the most resilient birds in our hemisphere, the American Golden Plover is a definite fan-favorite. It covers a lot of ground during its migration and has a unique sound. The breeding males and juveniles are beautiful and have a distinct white crown that puts them high on any appearance contest. The medium size of these birds as well as their somewhat undynamic feeding habits make them an easy bird to spot and an even easier target for great pictures!