The American redstart is a type of small warbler that measures in at a little over 4 inches in length. The redstart has an average wingspan that measures in at 6 to 7 inches. Adults are black with bright orange patches found across the tail and wings and on the sides of the chest. The female redstart features a light gray head, yellow patches on the wings, and on the sides of the breast, with light green coloring on the back. These beautiful birds can be found all over the country and are a pleasure to watch as they fly from limb to limb or forage on the ground. The American redstart is one of the most popular warblers to sight for its beautiful plumage and unique displays of behavior.

A Beautiful Bird to Behold

Many birders love sighting those rare colorful and very vocal birds that can capture your attention as they forage on the ground or take flight. This petite warbler features very vivid coloring which is one of the reasons it’s so popular to sight. Juvenile birds feature a coloring that’s similar in appearance to the adult female, with the exception of irregular black patches on the back, breast, head, and a darker tail.

To help spot these stunningly beautiful creatures, a good pair of budget-friendly binoculars will really help.

The redstart will inhabit deciduous forests with dense shrubs. Considered neotropical migrant birds, the redstart will spend the hotter months of the year in Eastern and Central United States and Canada. They will winter in the northern part of South America and Central America. Aside from forests, the birds are prone to inhabiting shade-grown coffee plantations during the colder season.

These birds mostly rely on insects for their nutrient needs and some fruit. They will rapidly move through the forest foraging for food and prey flashing their tail and wings in order to flush out insects from the foliage.

A Decline in Population

This species of warbler is abundant and widespread, yet there has been a decline in population found in many areas. The biggest threat these birds face is from a loss of habitat for both wintering grounds and breeding grounds. Because of forest fragmentation, these birds are left vulnerable to predation caused by cow birds that will lay their eggs inside another bird’s nest. The redstart is also vulnerable to condors and hawks. 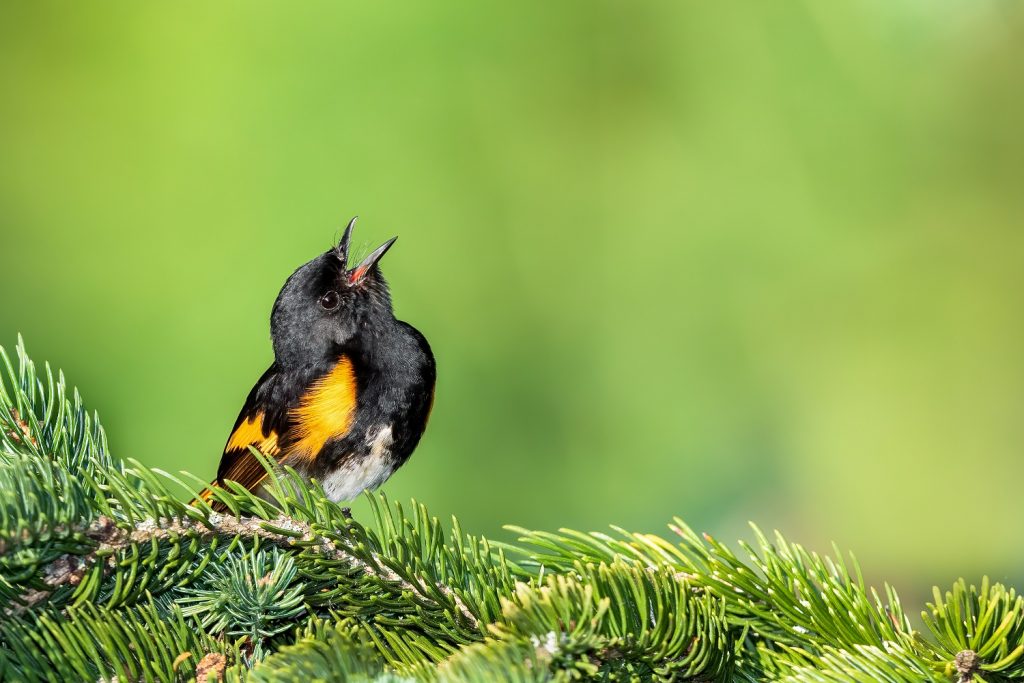 This warbler makes a type of pishing noise around a mixed flock of the species. Every season birder’s are often thrown by the bird’s variable high pitch songs. However, some versions of the bird song are very easy to recognize.

Using the best birdwatching binoculars, you can easily sight these colorful warblers. These birds are very active and can hop from branch to branch searching for insects. They will earn their dinner by startling their prey out of shrubs and treetops as they flash their patterned wings and tails. Young males and females have more subdued yellow flashing patterns on a light gray background. This predatory behavior is very successful when it comes to flushing out their dinner, leaving these birds well-fed and properly fueled.

Compared to other birds in the forest, these birds seem surprisingly hyperactive. When you’re out sighting them, you’ll notice that this bird is quick and active as it repeatedly dashes through bushes and trees after unseen insects. It can also commonly be found prancing along branches, opening and closing its yellow and black, or orange and black tail rapidly. The males will sing a very explosive and sweet song constantly during the early summer and spring months.

This is a wood warbler that’s named after the European species of the thrush family. However, this redstart is an American original despite the fact that it’s name derives from somewhere else.

This bird has a very impressive breeding range across Northern and Eastern America. It will nest in a variety of wooded habitats, mountain ranges and can often be found hiding along the forest edge.

This bird is considered one of the most visible migrating warblers. These birds will migrate in the winter from Northern South America to Mexico, or the Caribbean. A small number of these birds can be found in Florida. On rare occasions they can also be found in Louisiana and Texas.

If you want to make your yard bird friendly, you can feed these birds a wide variety of insects including grubs, mealworms, caterpillars and spiders. They also enjoy a wide variety of small and large invertebrate. The birds mostly seek insect prey which they can capture in midair or pick off leaves, but they also enjoy eating bird seed and berries.

To learn more about caring for your backyard bird population, click here to read my article on 8 ways to help birds in bad weather.

Typically, a monogamous pair is the norm for the redstart. However, some males will have two or more mates at a time. The male will sing the potential mate songs during their courtship. The female will make the final decision.

Their nests rest against a trunk or they can be attached to stems vertically from 3 to 60 feet off the ground. The females create the nests which look similar to an open cup that’s made out of rootlets, grass, and other plant fibers. The lining of the nest is made out of hair and feathers. The outside of the nest may be camouflaged using birch bark and lichen. The whole nest is held together with spiderwebs. Some birds will use nests that were created by other birds from the previous season.  On average, the female lays three to four eggs which she will incubate for 2 weeks. Both the female and male will feed the young. Before 10 days of age the juveniles will leave the nest, but parents will be in attendance. 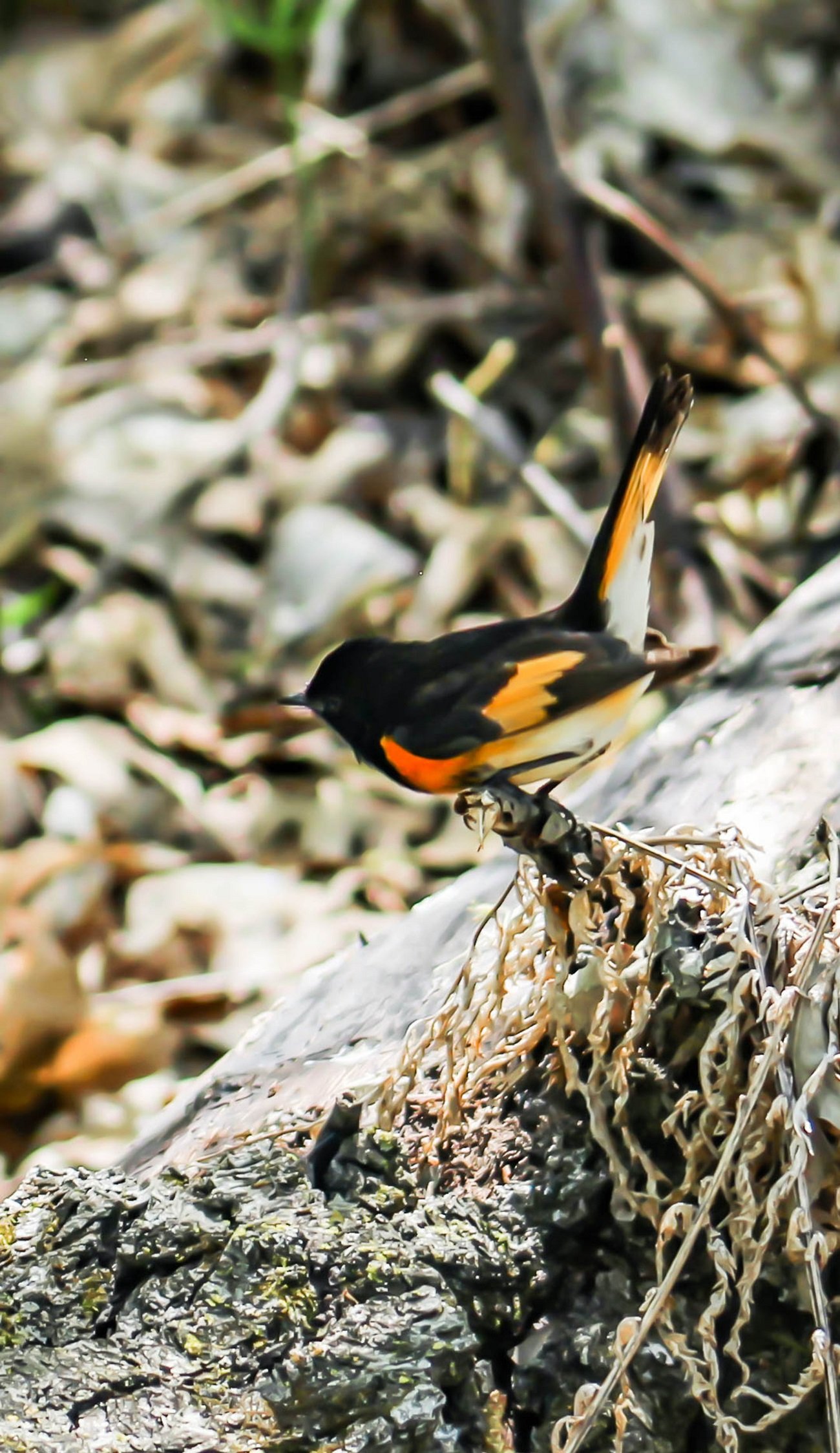 The American redstart is known for its vivid plumage, how it uses its unique coloring to earn its dinner, and its beautiful songs. By flashing its colorful wings and tail, this bird flushes insects out of trees and shrubs, quickly working to catch its dinner before it gets away. Flashing plumage can also work to attract a potential mate. These birds are also known for their songs and are considered very vocal birds, which also makes them a birder favorite. While there have been reports that this species is in decline, these birds can still be found all over the country and are very easy to identify.

Where Do Migrating Birds Spend Their Winter