One of the most common  warblers, and arguably the nicest to listen to on a walk in the forest, is the Black-throated Blue Warbler. It is part of the new world warbler family that is found primarily in the eastern parts of the USA and more rarely in the western parts of Europe. One of the most important things about this Warbler is that it is extremely sexually dimorphic meaning the males and females are vastly different.

In terms of their size, these warblers are a bit bigger than the rest of the members of that family. Still, they are small sparrow-sized birds with sharp and pointy bills. They are around 5 inches long and weigh around 0.3-0.4 oz. Their wingspan is around 20cm.  As for their shape, they are well within normal proportions and are fairly plump. There aren’t any significant size differences between males and females in regard to shape and size.

As the name suggests, males have a black throat with white underpants. The upper half of his body is blue, often described as “midnight blue”. The black throat often wraps around its face and flanks as well. On these flanks, there is a typical white spot that is found both on the males and females. The younger males have similar plumage but their blue part appears greener

Females are vastly different and can easily be mistaken for another species. They have brown upperparts with light-yellow underpants. Their wings are darker which continues to the tail. The crown around their heads is lighter with small brown patches. 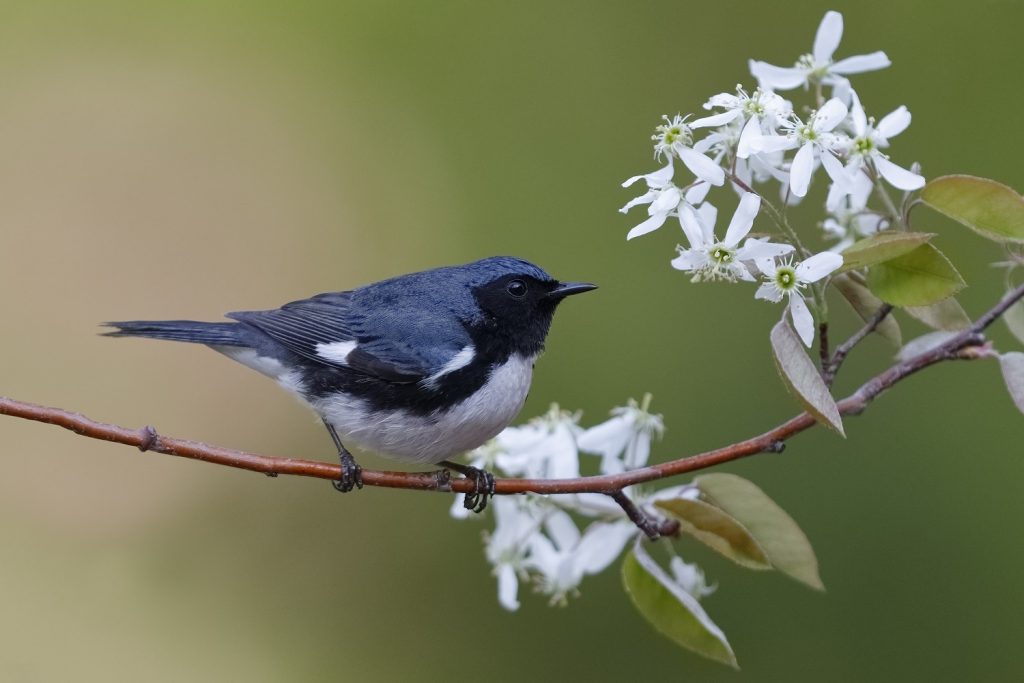 This plumage changes with the season. When it isn’t their breeding season, both the males and females have a slightly less distinctive plumage. This is why their white wing patch becomes one of their most distinctive features when you’re birdwatching in the fall.

Their most preferred food is insects. During the warmer months, they prefer eating moths, caterpillars, spiders, and crane flies. While in the winter they continue with their typical diet, insects are much more scarce then. This is why both males and females resort to seeds, berries, flower nectar, and small fruits. This makes them incredibly prone to visiting your hummingbird feeder.

Behaviour-wise, they mostly forage lower areas of the forests by scouting back and forth. They are also quite territorial when it comes to feeding and can enen chase away other Warblers.

During the breeding seasons, the Black-Throated Blue Warbler occupies most of the North-east parts of the USA along with some of the Southern regions of Canada. There is data for possible migration along the East Coast all the way down to Florida and inwards to Missouri.

In the winter, it migrates to the Antilles, Bahamas, and even the Caribbean parts of Central American and Mexico through some of the main flyways of North America.

One concerning fact about these Warblers is their susceptibility to warmer weather. If the average yearly temperatures rise with around 10 degrees, they can lose up to 70% of their existing range. Moving up to some parts of Eastern Canada will be their only choice but it will still heavily restrict their habitat.

How to Find It

Finding this Warbler isn’t particularly difficult if you know exactly where to look for it. Most of the time, looking at the treetops for this particular Warbler will be a waste of your time since it prefers spending time in the shrubby parts when feeding. It can also be found in larger forests and their lower canopy during the breeding season months. As a whole, compared to other Warblers this one prefers staying quite lower.

Their song is also quite distinctive and beautiful to listen to. Take a listen to it by clicking here.

The main difference between male and female blue warblers is in their plumage. While the male enjoys a colorful white-black-blue costume, the females are much blander with their grey and brown gradients. During the nesting season, the males are much more active and can be seen scouting for food and catching insects in the lower parts of the forests.

The white patches on the wings of the females can be sometimes hidden but when visible are a great way to ID different females from one another. 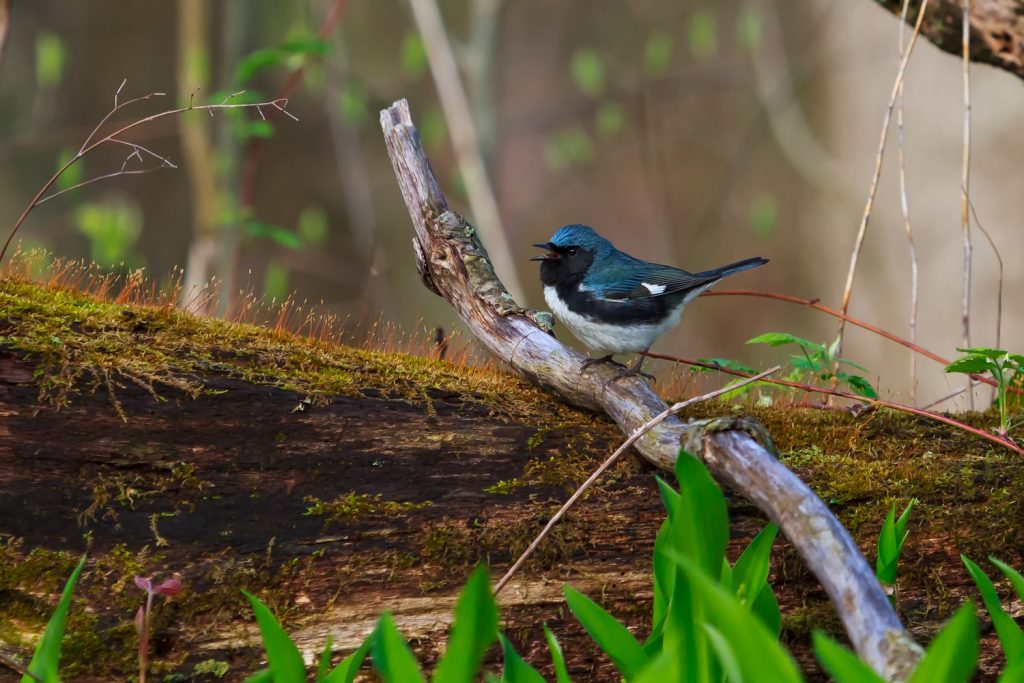 As I will touch in a moment, not all males are monogamous and they often have more than just one partner. More than 80% of the returning birds nest with their mate from the previous year. Their preferred nest site is a thick shrub that is offered from different species like rhododendron, viburnum, and others. They also like saplings with nearby dead branches. While the female builds the nest, the male helps with gathering supplies. The nest has an open-cup shape lined with pine needles and moss.

The female produces around 2-3 eggs, 4 at the most. They look white-ish with brown spots on them. The incubation is carried out by the female only for around 10-12 days. Thanks to the location of the nest deep into the forests, they don’t suffer a lot from cowbirds parasitizing their nests. The feeding of the young Warblers is done by both parents. The young birds leave the nest at an age of around 10 days but tend to fly badly at that time. It is interesting that the male becomes the sole caretaker for those fledglings while the mom continues by making a few more nests. They do become the provider for the last generation for the season, however.

One of the most interesting facts about this bird is that before it was well-researched and known, the males and females were actually considered two entirely different species thanks to their immense differences. Not only do they look vastly different but they also share different habitats most of the time, which led to the confusion in the first place. The common point which eventually unified them was the beak.

Another interesting thing here is the extra-pair mating which basically means that males travel to different territories within their habitat and have offsprings there too. It also happens at longer distances but that isn’t that well-documented yet.

These birds live quite a lot for such a small avian species. One of the oldest documented black-throated blue Warbler is thought to be almost 10 years old.

One last curious fact about warblers is that they’ve been spotted multiple times to steal insects that are caught on spider webs. They will even munch the spider if it is seen around.

If you want to learn more about another bird, I suggest checking out my article on the Indigo Bunting!

Thanks to the large range, the Blue Warbler has quite a healthy population. The growth trend is currently positive. While it was marked as “Least Concern” by the IUCN, deforestation still remains one of the main threats to it since it prefers woodlands. This is incredibly concerning in the tropical winter retreats of the bird and not so much in the Atlantic North-East.

While it is a tricky bird to find, the black-throated blue Warbler is one of the most beautiful members of this large bird family, especially the male one during the mating season. The females are much more different and are often hard to identify. You can use their white patch on the side of their wings to keep track of them and even identify them from one another. Both males and females are quite active when feeding but only the male remains that active while the female is nesting. These Warblers are a must-see if you are visiting the North-East for a birdwatching trip!