There are currently 127 species of cuckoos. Some species will call temperate zones their home, while most of the species will spend their time in tropical climates. These birds are well-known for their parasitic breeding practices, which involves laying their eggs in another species of bird’s nest, forcing that bird to raise the cuckoo’s offspring. Because of their parasitic breeding practices, these birds have earned quite the reputation for being ruthless. If you’ve always wanted to sight this species, then bring along a good pair of birdwatching binoculars, your birding guide and be prepared to wait out these stealthy, solitary birds. 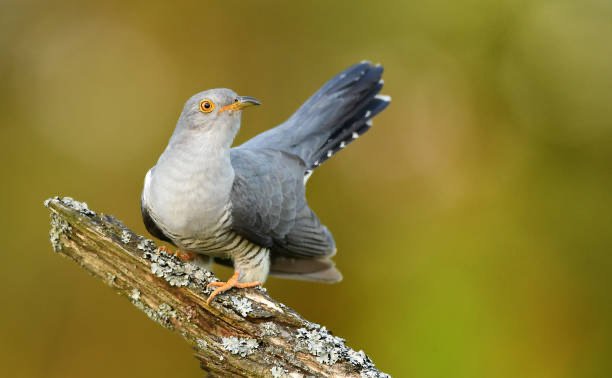 These birds don’t exactly look threatening. They possess a small head, with a thin bill and a long tail. Most species are about the same size as a standard dove.

However, this species varies greatly in size, with a length range of six inches up to twenty-seven and a half inches. These birds have a thin down-curved beak, with rounding wings, a long slender neck, and an elongated body. The feet of these birds are actually one of their most distinguishing features. Their feet are zygodactyl. This means that they have two outer feet that point backward and two inner toes that point forward.

With most species, you’ll find that the birds have a blue hue, or a gray or black coloring. Most species will have a white breast or barring on the underparts.

Larger species of the cuckoo will also eat other birds, small mammals, snakes, and lizards.

The most widespread subfamily of cuckoos, the cuculinae are found all over Oceania, Australia, Africa, Asia, and Europe.

These birds can also be found in a wide variety of habitat types and tend to live in open areas, such as fields, meadows, and marshes. However, you can also find them in alpine areas and woodlands.

Many birds travel to Africa every fall to avoid cold weather and a lack of food during the wintertime in temperate parts of Asia and Europe. 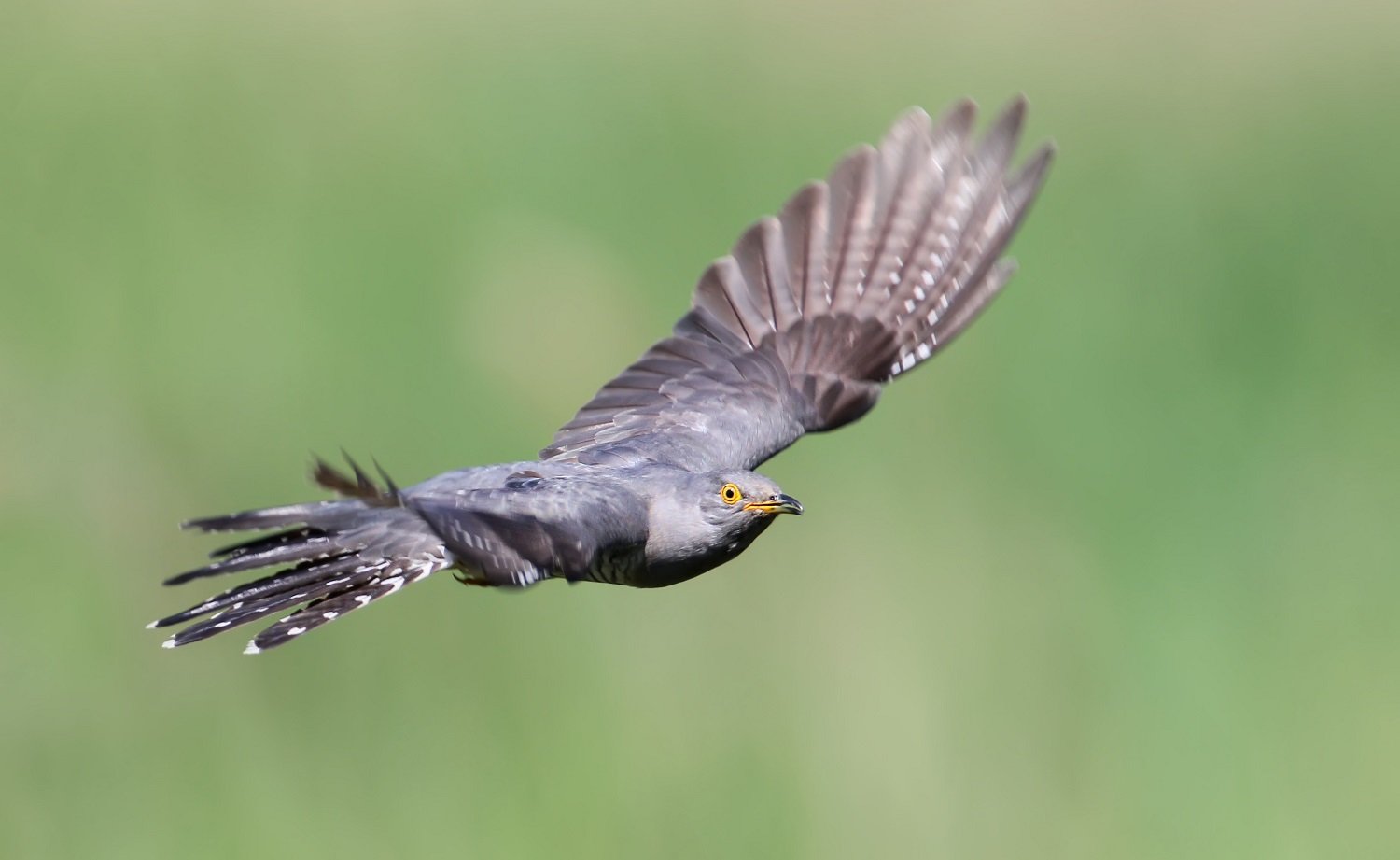 In America, the most common species is the yellow billed. This bird ranges across America, south to the Mexican border. The other species you’ll commonly find in the U.S. is the black billed. These birds can be found east of the Rocky Mountains. Both species will only practice brood parasitism on occasion. They also tend to breed later in the season than most birds, which may be the reason behind their occasional brood parasitism.

Both species will follow outbreaks of food sources, such as hairy caterpillars and other foods that other birds are not able to stomach. Some studies believe that the reason behind brood parasitism is because young birds would not be able to digest the spiny hairs of the hairy caterpillar, thus, they wouldn’t survive for long.

How to Find It

Hearing these birds is pretty easy. Sighting them is another matter. The yellow-billed species is very vocal. It inhabits the woodlands of North America and can be found in forests through the east. The black-billed species can be found high up in the treetops in conifer forests and dense woodland.

Most species tend to scan their surroundings for food as they perch quietly, in search of unsuspecting caterpillars.

In warmer weather, begin your search by trying to locate any areas that are infested with hairy caterpillars, or any type of large arthropods. Patiently wait in the brush and keep an ear out for their distinctive call. You can hear these birds any time of the day or night. In late summer, they make more of a dove-type cooing. When they’re migrating, they are mostly silent during the day, so you will have to wait them out and look for a sleek shape and rapid wingbeats.

Most species are very solitary. However, on rare occasions, they can be spotted in pairs or groups. Most species are also diurnal, but many will also vocalize at night. In most cases, these birds are very quiet and shy. They tend to hide in dense vegetation and will avoid any human contact.

These birds are considered patient feeders. They will sit for hours on hidden perches, motionless, with a hunched posture that is meant to hide their white belly or breast. They tend to hop around on the ground to chase some prey, such as frogs, lizards, and grasshoppers. They can also easily glean insects from branches and leaves.

The females and males can be distinguished by their coloring. On the male, the upper parts are a blue gray. Their bellies are white and intersected with darker markings. You’ll notice that some females look very similar to males, with the exception of a beige colored breast with dark lines. Other species of females are red-brown, or they may be completely covered with dark barring.

The male maintains a breeding territory using its bell-like call. Some species of females will also maintain their own territory, one that is independent of the males. Instead of defending a territory for mating purposes, like the males do, the females will defend an area to prevent other birds from discovering any ripe nests. The female with established territory will fight to prevent another female cuckoo from moving in and laying her eggs in an unsuspecting bird’s nest.

Most types of cuckoos are brood parasites. Instead of building a nest like most species of birds do, this species will search for nests built by other birds, with eggs already laid, and lay their egg in the other bird’s nest. If the other bird is of a similar size as the cuckoo, then they will lay several eggs. However, these birds are pretty smart. They will continue to come back to that particular nest and lay as many eggs as possible. They do this to try and trick the owner of the nest. In some cases, the laying bird will remove the nest owner’s own eggs to trick it into accepting the new eggs.

Studies have found that these birds are so fast, they can fly into an unattended nest, remove an old egg and lay one of their own, within ten seconds.

In most cases the nest owner doesn’t recognize the foreign eggs and will care for it, incubating the eggs as if it were their own. Only fifty percent of the species are brood parasites. These birds often target nests of warblers, meadow pipits, and dunnocks.

A host bird, which is the bird of another species that built the nest, will care for the hatchlings until they’re ready to leave the nest. Unfortunately, the host bird is usually much smaller than the cuckoo, which makes it very difficult for the host bird to feed the invading hatchling. 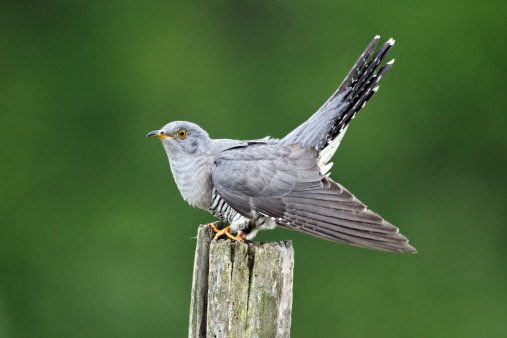 The western yellow-billed cuckoo is protected by the Endangered Species Act. This species travels between central and south America. If can be found in six states in Mexico and in twelve western states.

The cuckoo has also been placed on the UK’s threatened species list. There has been a 37% decline in the specie’s population since the 1990s. Some scientists speculate that this is a result of loss of habitat, which has also impacted the population of the bird’s main food source, the hairy caterpillar.

Cuckoos are curious, stealthy, and determined birds. While they are best known for their brood parasite behavior, researchers still don’t know exactly why these birds do this. Shy and solitary in nature, actually sighting this bird is a rare treat and a total challenge, although, even without catching a glimpse you can hear the male’s beautiful distinctive call.