Do Migrating Birds Fly During the Nighttime?

Migration is an interesting time for the birder. Some birds will remain behind since migration can be risky and can be very taxing on the body. But do migrating birds fly at night or do they simply fly during the day and find a safe resting spot until dawn? Many people are surprised to learn that night migration is very common, and it’s done for a variety of reasons.

Each year there are billions of wild birds that migrate at night. In order for a bird to migrate at night, they must shift their daily rhythm from diurnality to nocturnality. Researchers continue to study this rhythm change in birds, and how it can have an impact on their behavior and health. But why do some birds migrate during the night instead of the day? Do all migrating birds do this? Let’s find out.

What Science Tells Us About Nocturnal Migration

Researchers have spent years studying how a wild bird can prepare their daily rhythm for migration. Unfortunately, it remains largely unknown. With the use of an automated radio telemetry system, scientists have compared activity patterns of migratory and resident blackbirds during the pre-migratory season. These researchers found that healthy activity patterns between resident and migrant birds didn’t differ during night and day. Migrant birds didn’t change their daily rhythm as they had been observed when in captivity. Instead of progressive changes in daily rhythm, wild migratory birds experienced rapid shifts that allowed them to instantly make the switch from diurnality to nocturnality for the sole purpose of migration. Researchers also found that this rapid shift in daily rhythm is more commonly found in songbird species, however, in the past it was not able to be observed due to a lack of technology.

Every year there are billions of birds that migrate at night that are largely hidden from view due to the cover of darkness. Do these birds fly at night simply because it protects them from potential predators? Many researchers believe that these birds perform nocturnal flights on their migration journey to overcome energetic constraints since they’re flying in cooler conditions. Additionally, these birds will also fly at night to reduce their risk of being caught by predators during the long migration journey.

In order for these birds to prepare for this type of journey, it must undergo complex changes in several behavioral and physiological traits during and before migration. These changes are often referred to as migratory syndrome. In order to reach the state and prepare for migration a bird must undergo dietary changes that are designed to increase fat accumulation and energy stores. Additionally, there will be changes in enzyme activity that are associated with energy metabolism. In terms of changes in behavior, many migratory songbirds will need to adapt their daily rhythms by introducing a nocturnal phase of activity in which they perform migratory flights during the night. Essentially, the bird must both mentally and physically prepare for the long journey. By adjusting their foraging hours to night and loading up on high fat and carb-loaded foods, the bird is preparing its body by increasing muscle mass which will allow them to fly for a longer period of time.

The Advantages of Night Flight 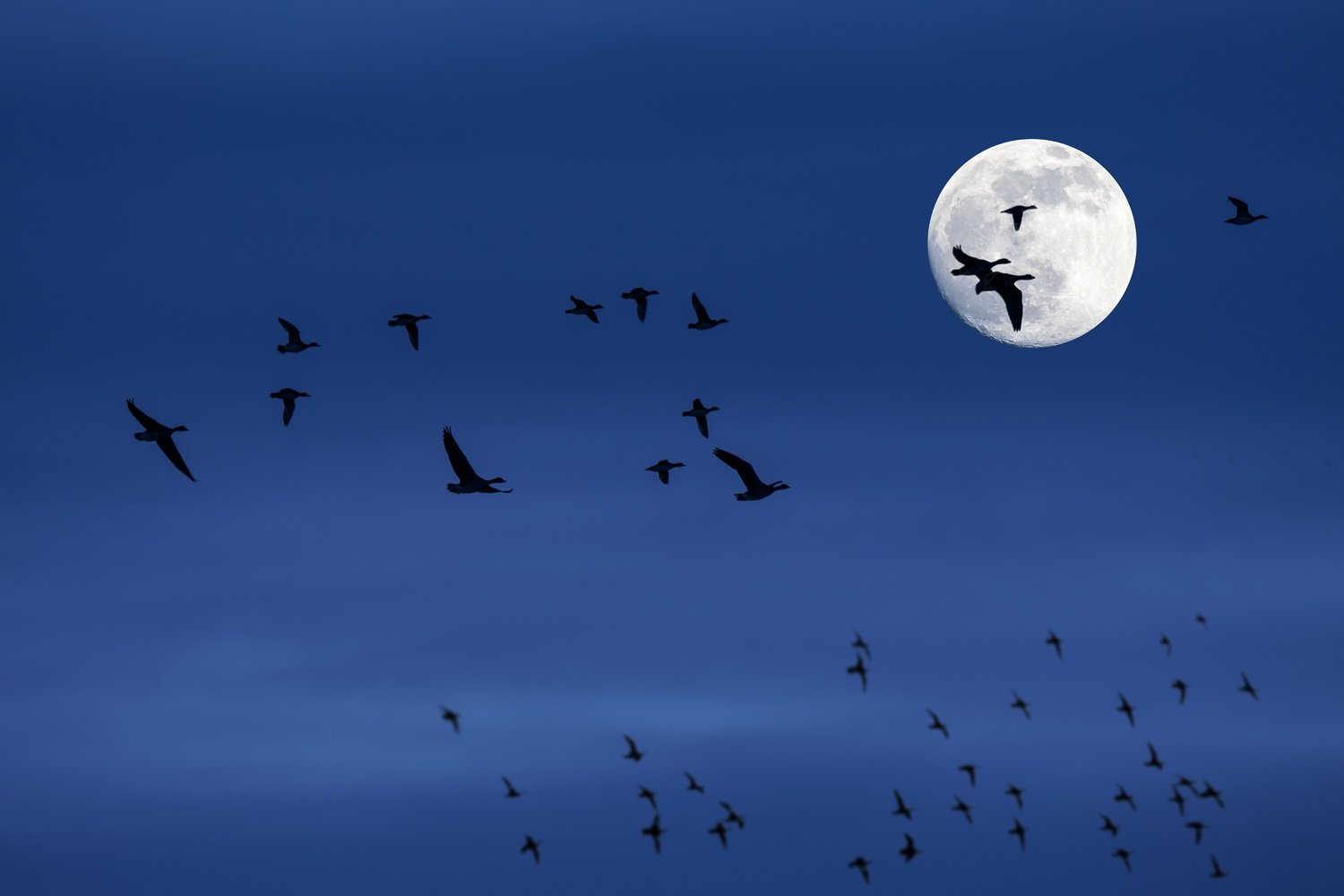 As I mentioned earlier, there are many advantages that come with flying at night instead of during the day. First, the bird doesn’t have to worry about hawk or falcon attacks. Next, the air in the atmosphere is nowhere near as turbulent as it is during the day. Last of all, a bird will stay cooler during the night flight and will not have to worry about overheating or exhaustion. Do you know that a bird’s body produces a massive amount of excess heat that must be released? The majority of this heat is lost from the unfeathered legs. Heat can be dumped more quickly the colder the air temperature.

Some species of nighttime migrators include:

The majority of these birds live in sheltered habitats such as the woods. However, they do require dense coverage in order to hide from predators.

Unfortunately, flying at night has become increasingly dangerous compared to how it used to be for these migratory songbirds. This is due to an issue called light pollution. Light pollution refers to lights from buildings and other structures that can disorient and confuse birds causing them to collide with the building. Cell towers, radio towers, and TV towers cause as many as 5 million collision-related deaths every year in North America alone.

This means a well-lit building can kill hundreds of birds during migration in just one night. This is an issue that has begun to attract public concern. Cities such as Houston, Chicago, and New York now follow a type of Lights out program during bird migration times in the spring and fall. This program involves turning the lights out at 6 p.m. at night until morning. This simple change can potentially save the lives of thousands of birds.

To learn more, click here to read my article on is light pollution dangerous to migrating birds?

Some researchers believe that a bird will use the earth’s magnetic field in order to help them navigate during migration, with the help of a protein called cryptochrome. This protein is highly sensitive to blue light and it may be the key to making this type of navigation possible. But there are still many questions regarding how cryptochrome functions in low-light situations. However, some studies have shown that this protein has evolved and now requires less light, allowing this protein to respond to and sense magnetic fields. Scientists were able to show that the protein is extremely efficient at responding and collecting low levels of light. Essentially, the songbird has evolved a mechanism that’s designed to enhance this protein’s efficiency. This means that even in extremely low-light situations, the bird will still have enough signal generated to migrate on the correct path.

A bird will migrate in order to move from areas of decreasing resources to areas of increasing or high resources.

The main reasons a bird migrates involves nesting locations and food sources. A bird that nests in the northern hemisphere will usually migrate northward in the springtime in order to take advantage of the increasing insect population, and the abundance of nesting locations, and budding plants. As the colder weather approaches and insect availability and other food sources drop, the bird will move south again. The biggest motivating factor is escaping the cold. However, many species such as the hummingbird, are able to withstand freezing temperatures just as long as they have an adequate food source. For the hummingbird, this is often a matter of relying on the best hummingbird feeders that many birding enthusiasts make readily available in their own backyard.

Each autumn a significant number of birds will fly south in order to find a warmer climate to call home. This type of migration pattern usually covers up to two to three thousand miles. The fact that many of these migrating birds are songbirds that migrate at night is puzzling to some birders since these are the species that are the most vulnerable to night predators and exhaustion. 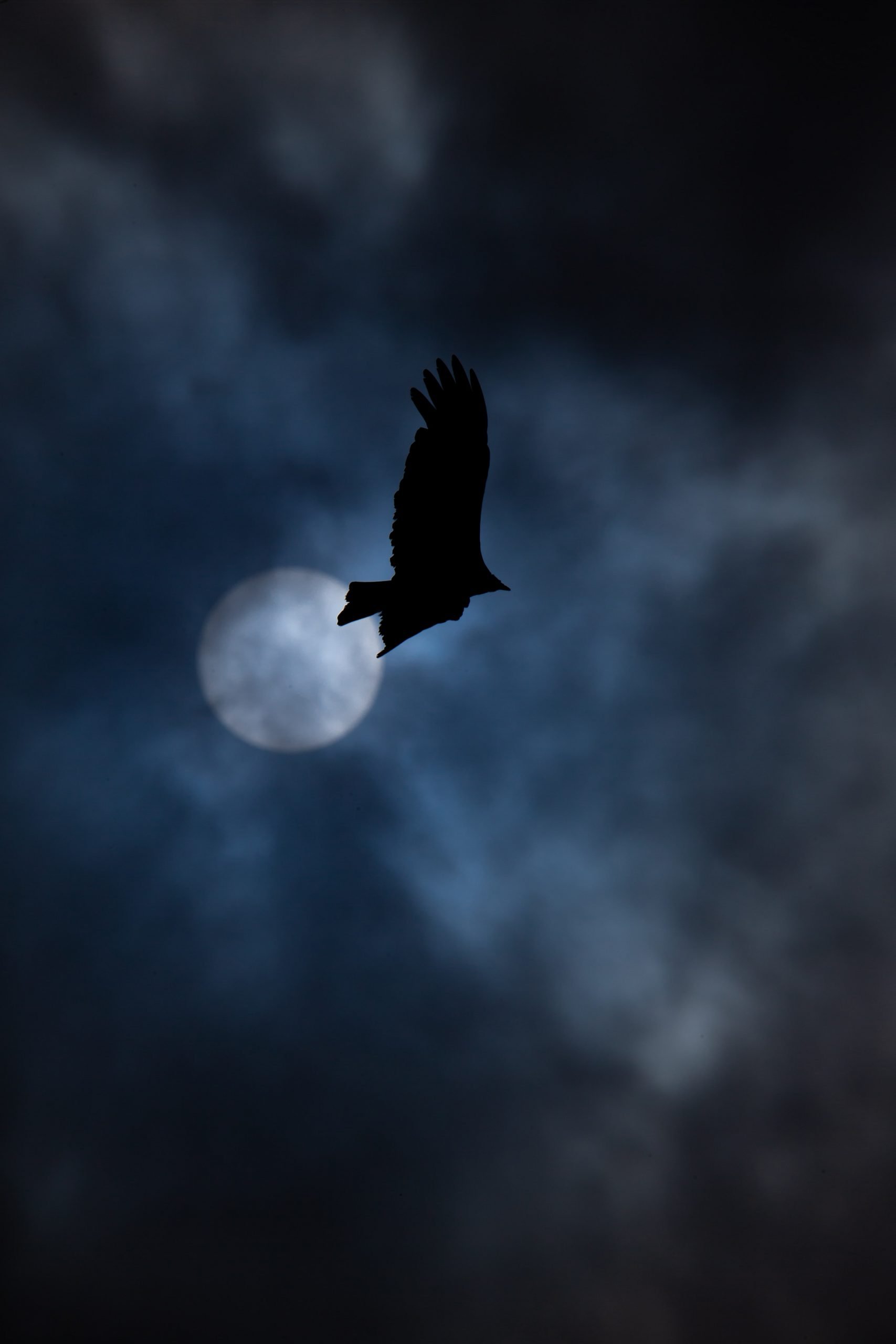 In the past ornithologists studied the nocturnal migration of birds by training their telescopes on the moon in order to count their quarry passing in fleeting silhouettes. Moon watching it is the term that they used and it’s actually a technical term still used today by many ornithologists. Back before the invention of radar, this discovery allowed the pros to answer the long-standing question as to whether or not birds

migrate nonstop for hundreds of miles over the Gulf of Mexico and challenging terrain. The use of these telescopes and the moonlighting technique gave them the answer that ornithologists have been looking for.

Back in the late 1960s, an independent study that was conducted under artificial skies in a planetarium suggested strongly that the common songbird called the indigo bunting which is found throughout Canada and the Eastern United States, used stars to guide them on their annual migration. The experiments showed that the stars that are located in the northern sky provided essential cues for the songbirds. These

birds obtained directional information using star patterns just like many people do. However, there are most likely other types of navigational cues that can also be of great importance to the bird navigating at night during migration.

Using radar scientists that observe night migration have reported huge, oriented flights that occurred on nights that were overcast. In this case, these birds would not have been able to use celestial information. However, whether there was some type of other cues used is still uncertain as researchers continue to learn about the guidance mechanisms migrating birds rely on.

So, do migrating birds fly at night? Yes and no. Not all migrating birds will fly at night during migration, but many will especially songbirds. This is done in order to conserve energy, which can be exhausted when flying in hotter temperatures, and when evading predators during the day. By flying at night, these birds are able to fly under the cover of darkness for hundreds of miles in order to reach a warmer, safer destination, without many of the dangers that come with flying during the day.