Learning about East Texas bird identification will show you a wide variety of species that are native to this gorgeous state. While most Texans are familiar many of the state’s iconic places, many are hard-pressed to come up with even just one native species of bird. Birding is currently considered one of the fastest-growing activities in America, with over 339 species of birds found in Texas alone. Thanks to the hot climate and diverse ecosystems, birding can be done in Texas year-round.

Learning how to identify the East Texas state birds can be a daunting task so I’ve created an extensive list that shows some of the hardest to sight and most beautiful species seen in this part of the state.

So, once you’re armed with the best birdwatching equipment, field guide, a good tripod for spotting scopes, such as the Vanguard Alta Pro 264AB Tripod, and the spotting scope itself, you’ll be ready to head out and conquer your own patch of green.

This white and grey bird has one beautiful voice which makes up for its plain appearance. Instead of singing its own song this bird is able to mimic the songs of others note-for-note. Male mockingbirds can sing dozens of songs from other species found nearby and they make it their job to be very vocal in order to attract a mate. 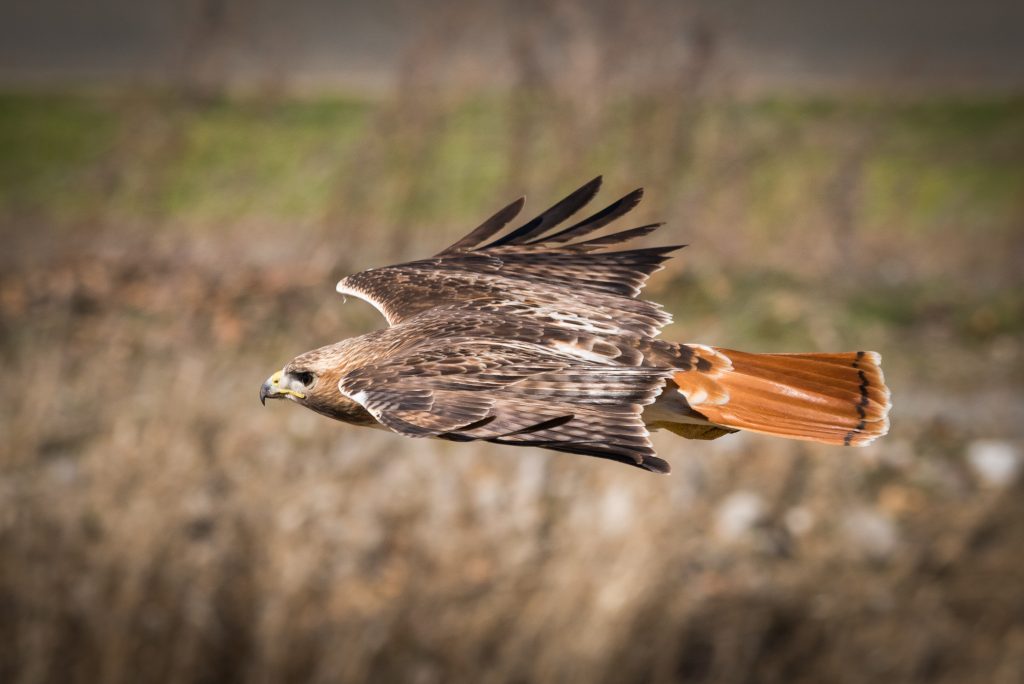 Also referred to as the chicken hawk, this large bird of prey can be seen pretty much anywhere in the eastern part of the state with numbers picking up during the cold winter months. The red-tailed hawk can usually be seen sitting on a perch along the highways as if they’re watching oncoming traffic. The bird’s fondness for small rodents makes it great to have in areas that are overpopulated with rats. When the bird is perched you’ll notice the dark belly bands found across the white bottom, the bright blacks and oranges that are found throughout the breast and back and the beautifully colored wingtips.

This bird is also referred to as a blue crane. However, this heron is not related to cranes at all. This tall wetland bird is often found hunting crayfish, frogs, and fish. Because of this, you can find them pretty much anywhere, including a roadside ditch, lake, pond, or creek. The bird has a beautiful bluish-gray coloring that is very eye-catching. When the waters freeze during the colder months of the year these birds are unable to chip away at the ice. Instead, they will switch to a dryer setting in search of small rodents.

Click here to learn more about birds that fly at dusk and their unique and interesting behaviors.

This bird is known as the mud swallow or the barn swallow because it builds open nests that are made from mud on patios, porches, culverts, and bridges. If you find one of these nests on your front porch you may have to deal with the barn swallow dive-bombing you in order to protect their young. However, these insectivores are good to have around since they consume pretty much any insects that you’ll find in your yard. When the sunlight hits them just right you immediately notice their beautiful iridescent dark purple feathers found on the tail, back, and head. 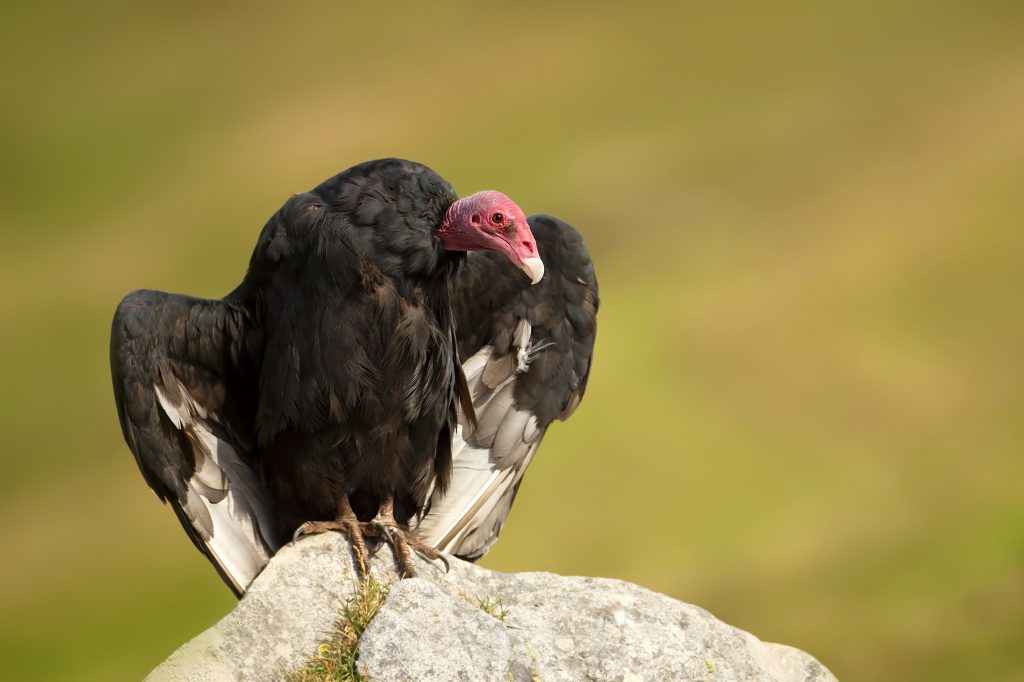 When flying this type of vulture has a beautiful silver coloring on the wings and tail feathers. Their bodies have a deep milk chocolate coloring with red featherless heads. There is another species of vulture found in eastern Texas known as the black vulture. The black vulture sports a gray head and it’s darker in coloring. When they fly, the black vulture also has a silvery tone to their wings but it’s found only on the outer tips. By far the turkey vulture is much more eye-catching and easier to spot.

This bird is actually named after its vocalization. The loud sound it makes can be heard not only in natural settings but in parking lots, parks, and ball fields. When they fly, keep an eye out for the bright orange rump and wings. As they fly you’ll be able to see two distinctive black bands found across the breast. Should you happen to find an injured killdeer on the ground limping don’t be fooled. This is a common tactic that the bird uses that’s referred to feigning and it’s designed to lure a person away from a nearby nest

This bird is actually native to Argentina and Alaska but it’s been found in Texas since the early 1900’s. If you have grain silos in your neck of the woods then you’ll find house sparrows. These birds are actually weaver finches. A bird that isn’t closely monitoring its nesting box can quickly be overrun by this pesky species of sparrow. The male has a black mask while the female is very plain-looking however she has beautiful pale eyebrows that are very eye-catching.

This bird is mainly known for dumping its eggs into the nests of unsuspecting birds that already have their own clutch. This type of odd behavior has created a conservation concern for other bird species. This bird’s name makes sense once you catch sight of it as the male has a shiny flat brown head and black body. Females don’t have the same coloring. The female has no speckles, spots, or streaks. Instead, they’re one uniform color which is either grayish-brown or predominantly a deep brown.

This is one of the most highly noticeable birds come springtime. The male red-winged blackbird features beautiful crimson epaulets against a black glossy body. The female is very different in appearance and features massive streaks of coloring that make it resemble a large sparrow. Typically, the female red-winged blackbird is considered the most misidentified bird in the state. If you’re having trouble identifying this bird check for pale eyebrows and a traditional blackbird beak.

These large pale doves have a black ring around the collar. They have a unique vocalization that they make when taking flight that sounds similar to a cat’s meow. If they visit your backyard feeder you’ll notice that they’re much larger than their native cousins the white-winged doves.

These birds need a running start in order to take off from the water, which is why you won’t find them hanging around small bodies of water. If you do happen to catch an American coot in a pond it’s usually indicative of inclement weather. This dark bird features a pale bill and feeds on aquatic vegetation and organisms. This species tends to flock to Texas during the fall and winter months since the water doesn’t freeze. However, they can commonly be found still hanging around during the spring.

Also referred to as cow birds since they have a certain fondness for following cattle around, this species is fairly new to Texas and made their debut back in 1955. These birds follow cattle around because the cows flush insects from their hiding places in the grass when they’re grazing. Of course, these insects are delicacies for the bird.

This bird is found all over Texas is often confused with the double-crested cormorant, which is also found in the eastern, central, and southern parts of the state. However, this species is much smaller and has a grayish bill. The thick white border found on the back of the bill is what sets these two species apart.

The southwestern and eastern parts of Texas are great places to spot the Lesser prairie-chicken. These game birds are very poultry like and feel right at home in dry, short grass plains. If you happen to spot one of these birds during the breeding season, then you’re in for a real treat since they often can be seen performing an impressive mating dance.

There’s no shortage of birders who want to sight the painted bunting, which is clearly one of the most colorful birds found in the state. Fortunately, these birds are widely found throughout all of Texas during the breeding months of summer. The male’s rainbow-hued coloring is very impressive, however, the female features a more subtle beauty with plumage that’s lemon-lime in color. The birder will need to track through secluded watering holes and thickets since these birds are considered especially shy.

While this species of bird is actually the state bird of Oklahoma, they tend to be much easier to sight in Texas, where they’re commonly found throughout the state. These birds usually perch in tall trees or on wires and flash their scarlet tails in flight.

As you can see, Texas is home to some of the most beautiful birds in the country. Each bird has its own unique identifying marks, vocalizations, and behaviors.

If you’re trying to brush up on your East Texas bird identification, then I hope you’ve enjoyed my list of some of the most beautiful and interesting birds found in this part of the state. Of course with over 339 species of birds in Texas alone you’ll have no shortage of birding adventures and new species to sight.