One of the larger woodpeckers in the Picidae family, the gilded flicker is loud, beautiful and graceful. It’s commonly found in the eastern Colorado desert regions, Yuma, and the Sonoran. It’s primarily a ground foraging woodpecker and features a spotted dark barred brown back, a pale gray throat, and face, white rump, red mustache, and a thick black crescent located on its upper breast.

The gilded flicker is a brightly colored woodpecker that spends most of its time on the ground, foraging for ants and other insects, although they have also been known to live off of fruits, seeds, and grain during the colder months of the year when insects are scarce. Their beautiful brightly colored feathers are used to both attract mates and scare off enemies. These birds, like the penguin, mate for life and both sexes take care of incubating their young and caring for their brood until they’re ready to leave the nest.

Read on to learn more about this fascinating species of woodpecker, where you can find them, what makes them so unique, and how their young are able to keep dangerous predators at bay.

Aside from the eastern Colorado desert, Yuma, and the Sonoran, the flicker is also found in the Baja Peninsula. Throughout its range, this bird is a permanent resident, with a local, very short migratory movement.

What Is A Bessie Bug – An Overview

They tend to live in a variety of woodland habitats and often dwell in the southwestern desert woodlands. For nesting purposes, they prefer dry climates. They also frequent spaces that are occupied by humans and have adapted well to rural, suburban, and urban areas. 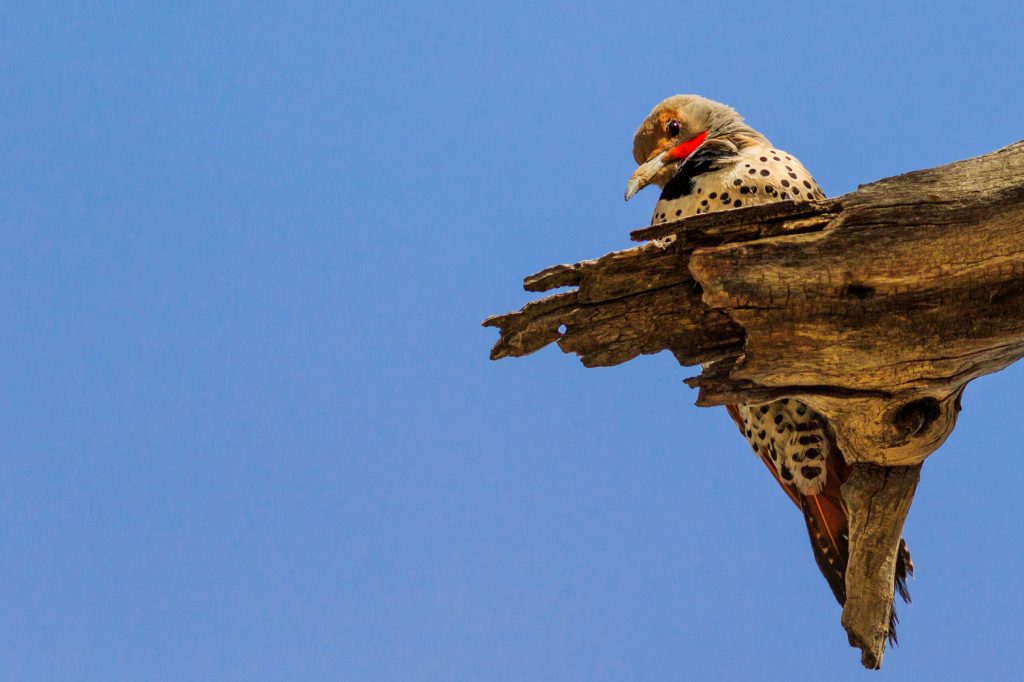 This bird measures in at around ten to eleven inches, weighing just under four ounces. Their wingspan is an impressive eighteen inches.

What gives these birds their name is their distinctive golden markings found under the tail and wings. The bright colors of the shaft are visible on the wing’s undersurface. These birds also flash these vivid colors at a potential mate as part of their courting behavior. This is also done when they’re defending their territory.

Their back is a very light shade of brown and features horizontal barring. On the upper breast is a large crescent in black.

Juvenile flickers resemble adults, however, their color is not quite as bright.

These non-migratory, solitary birds mainly feed on insects. Ants are their food of choice considering they tend to feed on ants more than any other bird found in North America.

The flicker is a ground forager, which is why they spend several hours a day on the ground, feeding on nectar, pollen, and insects.

During the colder months of the year, the flicker may eat fruit found on shrubs and trees.

They can often be found digging in the soil using their heavy bills, or hunting in vegetation. Flickers also hunt invertebrate that live in the bark of trees. When they forage in trees their diet consists mainly of insect larva, caterpillars, wasps, and beetles. They have also been known to consume, grains, seeds, nuts, acorns, and even worms.

The flicker returns to their breeding ground in late March or early April. During this time, the male exhibits its courtship behaviors. By the beginning of May, the flickers pair up and begin mating. Like penguins, the flicker mates for life, however, they can find a new mate if one disappears or dies. Typically, they produce one to two broods a year. 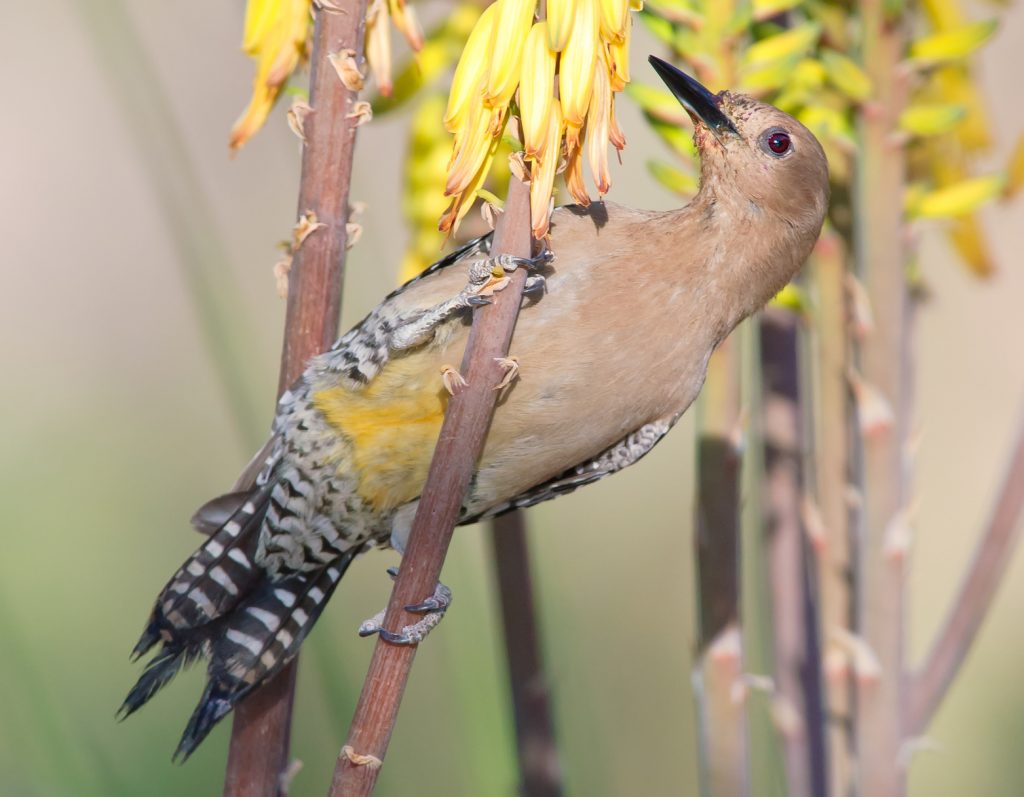 For their nests, the flicker will search for an open area. It commonly chooses places at the edge of a meadow or forest. Their nests have also been found near ponds and swamps. A female will lay an average of two to five eggs which both parents take turns incubating for a period of two weeks. When the egg laying process begins both the birds will remain in the nest. The female will spend most of the time sitting on the eggs, however, the male has been known to take over nighttime incubation.

The flicker’s young will typically hatch within a day or two of each other. After they hatch the young will begin making a unique, odd sounding buzzing noise, which they will continue to produce until they’re completely feathered. This odd sound is designed to scare off predators and has been compared to the sound a swarm of bees makes.

Many birders tend to identify the flicker, not from its beautiful plumage, but by its odd vocalizations.

The flicker produces a long call that’s high-pitched and incredibly loud. They have also been known to produce a loud tapping sound which is done specifically on metal objects to warn other flickers that have entered their territory. Their sharp, loud call can be heard for over a mile and is considered a characteristic sound of the Sonoran Desert.

What is the Best Tool to Use to Sight Flickers?

Both binoculars and sighting scopes are great choices, but since these birds can be difficult to find because their vocalization range is over a mile, spotting scopes are often a better choice. Spotting scopes typically have a much longer range than birding binoculars, although they’re also known to come with a higher price tag. If you’re shopping around for a budget-friendly spotting scope, we recommend the Emarth Waterproof Angled Spotting Scope. If you’d like to learn more about spotting scopes, the features they have to offer, and what you can expect in terms of performance, click here to visit our spotting scope buyer’s guide.

Are These Birds Rare?

Famous bird watchers have written about these interesting birds for centuries. Their unique behaviors and their way of communicating with one another are one of the reasons many avid birders continue to write about the gilded flicker, but over the years their population has been in a steep decline. The flicker is widespread and fairly common, however, their numbers have decreased by as much as one and a half percent each year over the past several years, which has resulted in a total decline of just under fifty percent. While their current population of nine million makes this number less alarming, it’s still a concern considering their number continues to drop annually, placing them on the list of common birds that are in steep decline. Currently, they are number ten on that list out of twenty.

Why Does the Flicker Drum?

As we mentioned earlier, these birds are known to make a type of tapping noise, which can also be considered drumming. These birds will mainly exhibit this type of behavior in order to warn flickers that are new to the area that they’re not wanted in that specific territory.

At times they will also make the tapping noise as a way to communicate with their mate, their young, or other flickers that are close by. When making this sound, they will strike an object in order to make as much noise as possible, which is often why they choose to do so on metal objects.

The glided flicker is an interesting, intelligent woodpecker that loves to feast on ants, mates for life, and features unique, powerful vocalizations that are designed to scare off predators or warn invading flickers to stay away from their territory. Like other woodpeckers, the flicker is very resourceful and can live off of fruit and grain, during the winter months when insects become scarce.