January 19, 2021
BirdingRocks is supported by its readers. If you buy through our links we may earn an affiliate commision. Learn more.

The great crested flycatchers are among the largest species of flycatchers, featuring a beautiful blend of colors, and a very loud, consistent, and simple call. If you have your new birding binoculars on hand, these are a great first bird to sight, since these large birds are often heard before they’re spotted.

The flycatcher measures in at eight and a half inches tall, making it a very large perching

species. The birds are 22.2 centimeters in length and have a wingspan that measures in at 33 centimeters. Their head is slightly domed and rounded or crested. This species has a thick heavy bill that’s mainly black with a light-colored base. The feet and legs are black or brown.

These birds feature a beautiful blend of colors, with a yellow tail, underwings and belly, and an olive back and gray head. 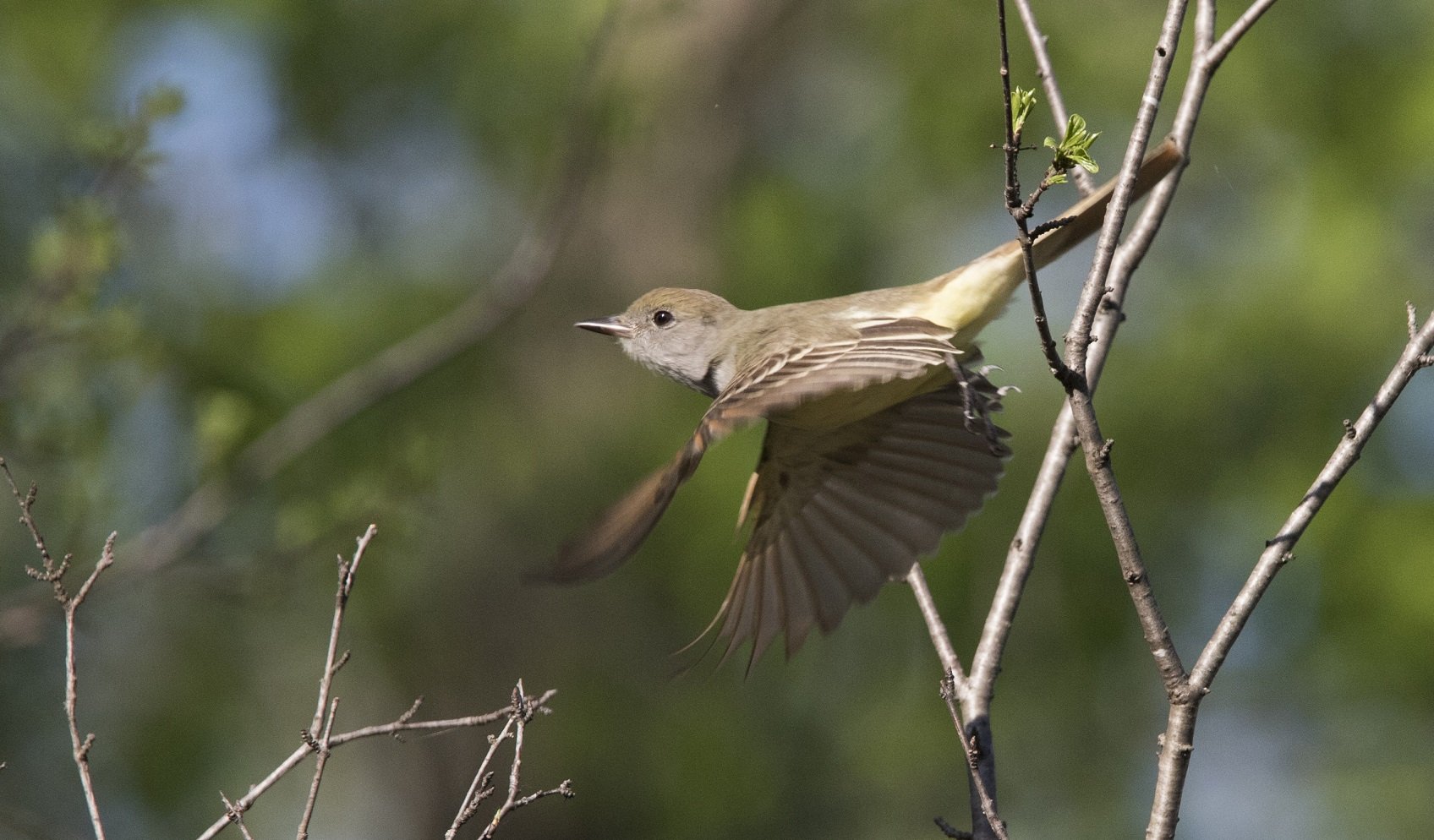 This bird is an insectivorous species. However, on occasion, it will also eat fruit. These birds will utilize a hover-gleaning method to snatch their prey aerially from the surface of plants. The birds usually forage from a perch within the upper canopy of a tree. They perch higher than most types of insectivorous birds.

Their food of choice includes:

As I mentioned above, these birds will also eat fruit occasionally. It’s often seasonally available fruit such as a variety of berries.

These birds inhabit Neotropical and Nearctic regions of South, Central, and North America. This migratory bird breeds across the eastern part of America, as well as Canada’s southern edge. During the year, these birds can be found in the northeast, southern, and central America.

These birds prefer mixed-deciduous or deciduous woodland areas. They are commonly found at forest edges or semi-open canopies. These birds will also call urban areas home and can be found in large canopy trees.

How to Find it

The morning will be the best time of day for birdwatching. But even at the right time, these birds can be challenging to sight for some. Even if an area is heavily populated with this species, you may hear these birds, but you will rarely see one. While these birds are not secretive and can constantly be heard sounding off with their distinctive, very loud call, sighting one can require plenty of patience.

You’ll have a better chance of spotting one in late spring and throughout summer. During this time, you will hear the bird’s weeping whistles high in the treetops. Most birds will cease calling when they are nesting to prevent attracting attention to their nest. However, this species will continue to call out for the entire season.

So, if you want to spot this bird, listen for their call and look to the treetops. If you’re able to spot any tree cavities, be on the lookout for the bird’s long colorful tail. Then, you can plan on sitting back and waiting to catch a glimpse of this hard to sight bird.

Differences Between Males and Females 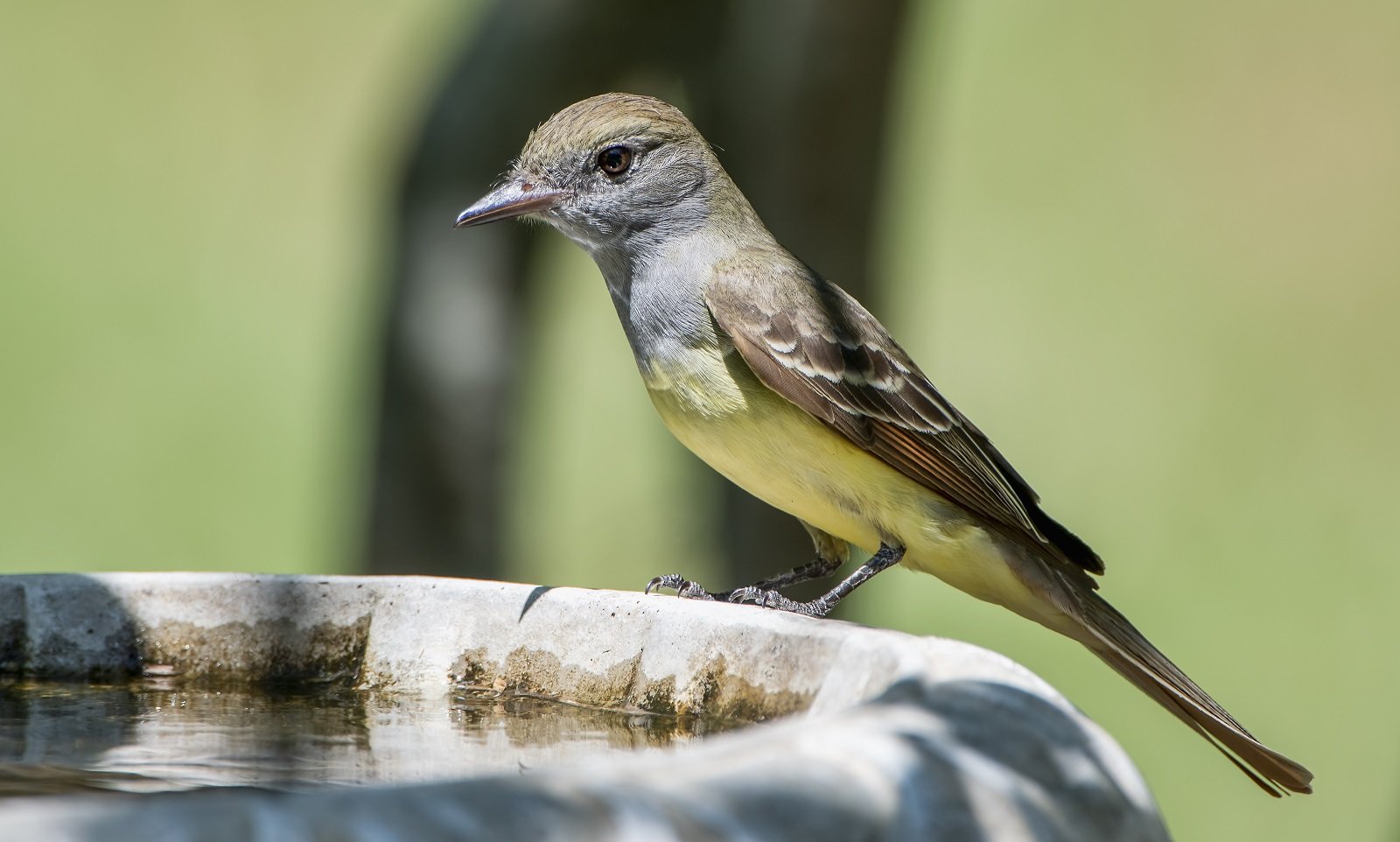 Females and males are alike in appearance. Both sexes will also aggressively defend their territory against any birds that try to trespass.

These birds are often heard before they’re sighted. They’re known for their consistent, simple call that rises in pitch before it ends abruptly. A male will usually sing a very complex song at dawn during the breeding season and will sing often during this time.

A female will construct a secure and safe nest as the male defends the surrounding territory aggressively before the eggs are laid.

The nest site is often a hole in a tree found twenty to fifty feet above the ground. These birds may also nest in artificial sites including hollow fence posts, drainpipes, and birdhouses. If you want to add a birdhouse to your backyard to attract this species, make sure you carefully measure the size to accommodate a nesting female. In some cases, well-meaning homeowners will place a birdhouse outside for a nesting flycatcher, but if the house is too small for this large species, the female will still stay and lay her eggs. This can lead to discomfort for the female who spends all hours incubating the eggs. It can also cause serious damage to the female’s very long tail feathers. Additionally, the house should be properly secured to a tree or post, high up off the ground.

The foundation of the nest is made out of feathers, rootlets, strips of bark, weeds, grass, snakeskin, and other materials.

The female will incubate 5-6 eggs for a period of two weeks.

Once the female lays the eggs, she will be the only one to incubate the eggs as the male continues to protect and defend her and the eggs. Both males and females participate in nest sanitation after the eggs have hatched and will remove food remnants, fecal sacs, and eggshells. Additionally, both the female and male will provide food for their hatchlings, although the female does so more often than the male. The hatchlings will live on a variety of insects.

The offspring hatch with their eyes still closed and without feathers. These young require plenty of care from the male and female. Fortunately, both parents participate in the care and feeding of their hatchlings.

After the nestlings have fledged, this family stays together for a period of just three weeks. During this time, the male and female will continue to defend their territory and feed their fledglings.

This species will locate their prey from their tree perch, scanning all directions using a fast and constant head movement. They are considered swift and agile fliers. They are very persistent when it comes to going after their prey, even if they miss it initially. Their pointed beaks help them to catch their prey when they’re in flight.

Males will typically go after females to initiate mating rituals. If the female flies back to her cavity, the male will hover for a while before it flies back to its perch. Once the couple has mated, the male becomes very protective of his mate. Any species that intrudes will get a warning call from the male, who will use a forward-leaning posture while nodding its head.

This species has population numbers that are stable and high. Like many species of bird, the flycatcher species have been negatively impacted by many types of human activities such as the conversion of forests to agricultural and urban areas, man-made structures built in migratory paths, and the use of pesticides. These types of activities have resulted in habitat loss, collision mortality, and a decrease in food.

These birds are usually found in forest clearings or in open woodlands areas. They can also be found in heavily wooded city parks located all over eastern North America during the summer. These migrating birds spend their winter in south Florida. In the fall months, migration will begin late August. Spring migrants will return to the Gulf Coast at the end of March.

The lifespan of these birds can range from two years up to ten years. Unfortunately, researchers have been unable to determine the bird’s exact lifespan since a very small number of birds will go back to their birthplace.

The largest species of flycatcher, great crested flycatchers can be difficult to spot, if you don’t know where to look. Having a little patience and keeping an ear out for the very distinctive call can significantly increase your chances of sighting one of these gorgeous birds, especially during the nesting season.