Otherwise known as a “blue canary”, the Indigo Bunting is undoubtedly one of the most awe-inspiring little birds that we can see in our backyards! Apart from their mesmerizing blue appearance, they also have a cheerful tone and friendly energetic behavior. In this article, we will go through all of the details about these little birds, see what they like to eat, where they migrate and learn a few more interesting facts in the process!

If you’re interested in finding the best bird-watching binoculars for your next birding trip, click here! Now, let’s start with a general description of these beautiful birds…

This particular bunting is one of small size, especially compared to other birds it shares its territory with. Males and nonbreeding males are some of the most beautiful birds in nature according to most birdwatchers. This is due to their bright-blue plumage that catches your eye and doesn’t allow you to take a second off from looking at it. The stocky build is accompanied by a relatively short tail and a short, conical bill. The blue colors of the breeding males are at their brightest hue on their heads. That color tone on the head is what gives this bunting its “indigo” name.

Females and immature males are more finchlike but have similar overall characteristics as the breeding males. They are, however, brown in color, with whitenings on their necks and underpants.

Size-wise, this bunting reaches 6 inches in length, has a wingspan of around 7-9 inches, and weighs not more than 0.5 oz on average. 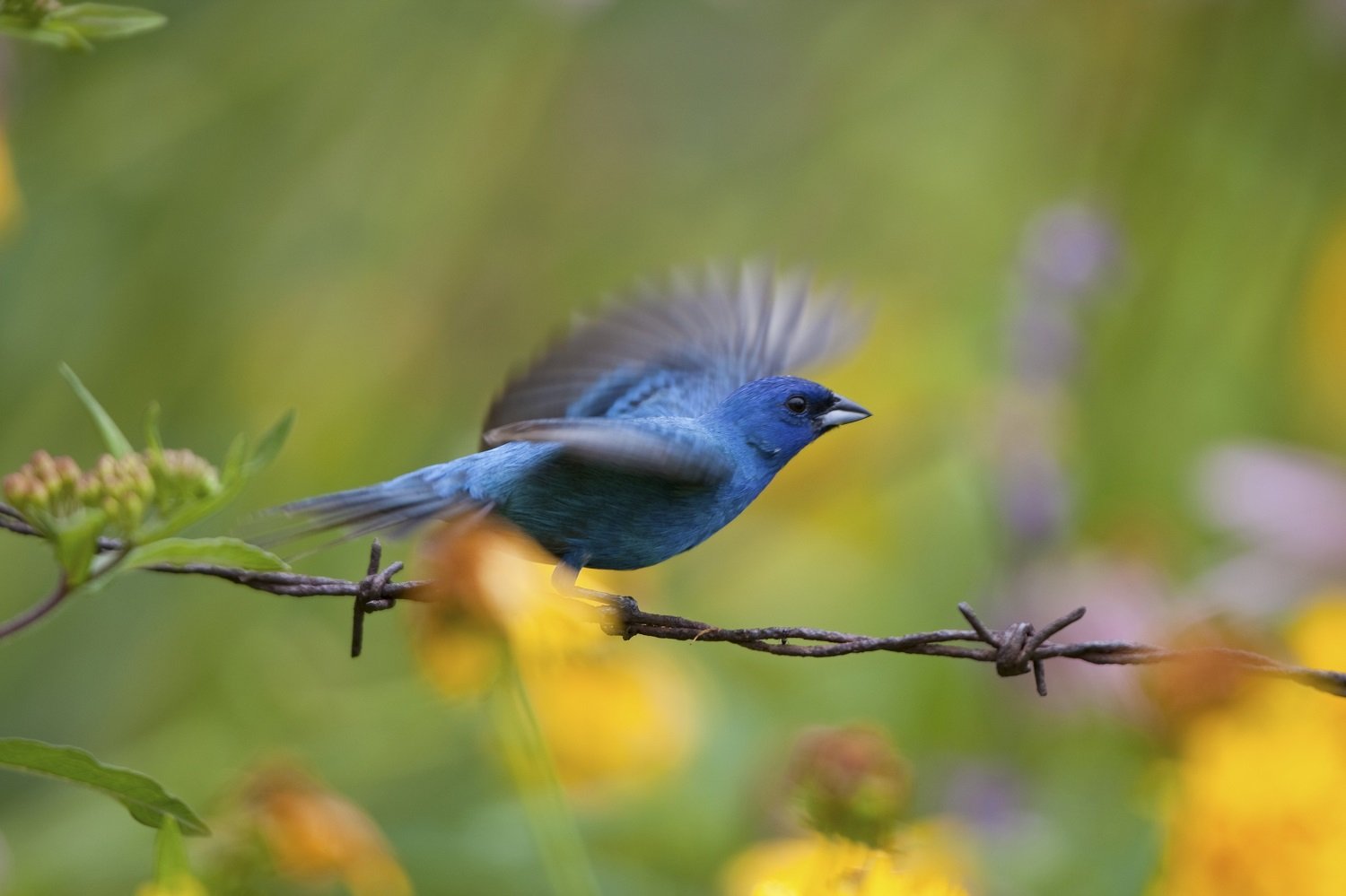 The favorite snack of these birds is small seeds and berries. They do, however, also love eating buds and insects. Their most favorite seeds are thistles, goldenrods, and dandelions. From the seeds, they prefer snacking mainly oats. Anything that ends on “berry” is also high on their menu, as long as it is available. During the warmer months, they prey on smaller insects such as spiders, caterpillars, aphids, grasshoppers, different types of beetles, and cicadas. One last thing that these little birds will resort to if there is nothing else available is tree leaves, especially from aspen, oak, hickory, and maple.

Their foraging behavior is mainly concentrated in hopping on and off branches in lower parts of the wood’s vegetation. They are known for their athletic hop on the ground and the even more fascinating clinging to twigs and other thin sticks. During the

You can really attract and pleasantly surprise the indigo buntings that frequent your yard by building them a birdhouse. And if you put some of their favorite snacks in there, you just have to prepare the spotting scope, because you will get plenty of blue visitors! 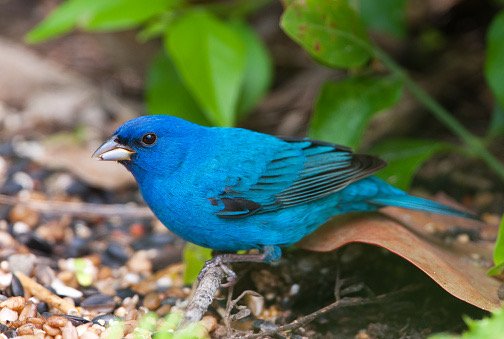 In terms of preferred habitat, the indigo bunting likes living on the edges of brushy forests, deciduous woods, or farmland. It also doesn’t avoid urban areas where it loves spending its free time on top of bird feeders.

Its breeding range spans across almost all the United States excluding the north-western states. It also inhabits parts of Southern Canada where it can be also spotted. The migratory range of these birds stretches further south until the bunting reaches its winter vacation destination. These winter lands are located in the whole of Central American as well as the northern parts of South America. Additionally, this bird has been spotted across other continents, primarily in Europe in countries like Iceland, Ireland, Germany, and the Netherlands.

Male and female indigo buntings are vastly different in terms of their plumage and slightly so in terms of their overall shape. Both are sparrow-sized birds but while the males are stocky, the females and immature males are finchlike. Both have short, conical bills and that’s about where the similarities end. The breeding male has a completely blue plumage with black ends on its wind feathers. The blue is at its peak intensity on their heads. Female indigo buntings are harder to identify mainly due to the fact that they aren’t “indigo” at all, and are, in fact, brown with a white neck and underpants.

The non-breeding male is also immensely beautiful and presents itself as a mix of both breeding males and females. Its whole body is irregularly covered in blue patches on a green/brownish background.

In terms of the nesting habits, these buntings nest primarily in fields and where their feeding grounds are – edges of bushy forests. Nest can also be found in roadsides, near railroad crossings, and you guessed it – birdhouses. The female indigo bunting is the one that looks for and starts building the nest, while the male watches (but never helps). It takes around a week for the female bunting to finish the nest. After its done, the nest will feature an open-cup design that mixes bark, stems, leaves, grasses, and even spider web for added external durability. The inside of the nest can be lined with deer hair which is common among such types of birds. The female lays around 3-4 eggs and the incubation period is no longer than 2 weeks. When hatched, the chicks will be nestled for up to 2 weeks again before they leave the nest.

To find out when do most birds nest in the birdhouses built for them, click here! 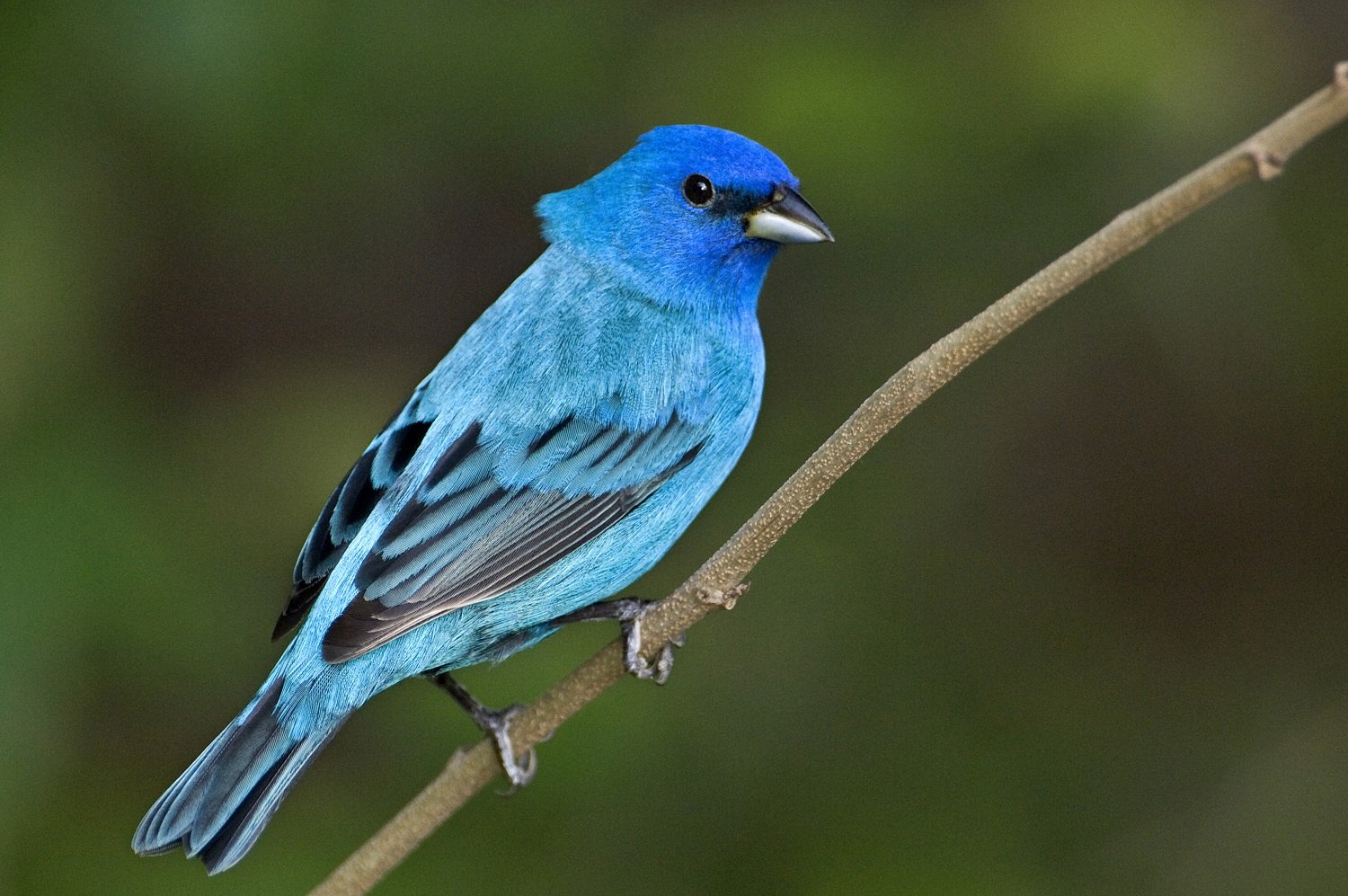 If you’ve taken notes at the habitat and regions these buntings traverse during their breeding and winter periods, then you’ve already done half the work in finding an indigo bunting. The rest is naturally rather easy, as the breeding and non-breeding males are rather easy to spot, especially on green or brown backgrounds. The females are naturally more tricky but are still identifiable if you keep your notes nearby.

The places where you will most commonly find this bird during the summer months are next to remote rural roads. Telephone lines are some of their favorite perching destinations and thanks to their distinctive singing notes, you will be able to quickly recognize if there is a bunting near you to spot. During their migration months, you can find flocks of them in agricultural lands or larger lawns. In the fall, their plumage is mostly brown, making them much harder to identify than you’d think. However, even then, there are still some hints of blue in their wings and tail which are a tell-tale sign that you’re looking at an actual indigo bunting!

If you’re struggling with the identification process of different birds, I highly suggest checking out my detailed article on that topic here! There, I’ve compiled a full list of aspects that you need to keep in mind and dove deep into each one of them so that you understand the general concepts of birdwatching.

Purchasing some budget binoculars for bird watching may be an excellent way to help spot these buntings while not spending all of your budget.  Additionally, you could also pick up an affordable strap harness for your budget binoculars and you will have some premium birding equipment at a reasonable cost.

There are countless curiosities surrounding buntings but some of the best ones are:

How do you attract indigo buntings? 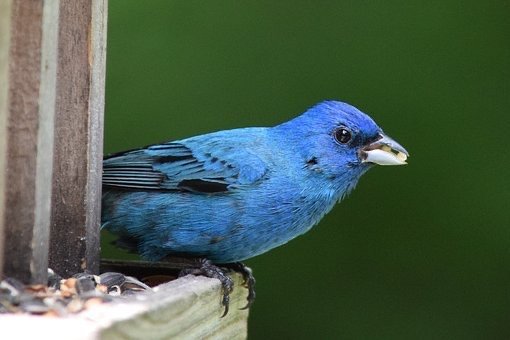 One of the best ways to attract these beautiful birds is by hanging bird feeders in your backyard. If you wonder what to stock in your bird feeder to appeal to their taste make sure you add Nyjer Seeds, Mealworms, thistle, hulled sunflower seeds, and/or small seasonal fruits of your choice.

If you’re interested in bird feeders that are squirrel-proof, make sure you check out my full Buyer’s guide on that topic! There, I’ve listed some of the top models for this year, as well as given you some priceless insider information on how to pick the ideal bird feeder for your backyard!

Even though there are still plenty of sightings of indigo buntings, their populations are decreasing at an alarming rate. Other species like the Common Yellowthroat had a similar fate where they were fairly common and then slowly started being considered a rare sight. The major reason for the decreasing indigo bunting populations is the ever-increasing habitat loss in both their breeding and wintering grounds.

What does it symbolize to see an indigo bunting?

These birds symbolize a mystical meaning of wisdom and spiritual realization. Blue, in general, is the spiritual color of communication between beings. Indigo blue, on the other hand, focuses most of the energy inwards, meaning it potentializes profound thoughts, self-understanding, and more.

How long do indigo buntings live?

While they are beautiful, passerines such as the indigo buntings have a relatively short life span. They live up to 3-4 years while the life span of species that migrate is considered to be even lower. The main reason for that is the multiple predatory birds that feed on them during their voyages.

Do indigo buntings nest near birdhouses?

Depending on the birdhouse, indigo buntings might prefer to avoid it. Ideally, they would settle in a 5 by 5-inch floor birdhouse that is 7-10 inches tall on the inside. They prefer small entrance holes with a diameter of around 2 inches that is located around 4-8 ft from the ground.

As a small bird with unrivaled beauty, the Indigo Bunting is the birdwatcher’s favorite sight. Its sky-blue plumage is a thing to marvel at and the fact that the bird is commonly found in urban areas makes this bird a definitive fan-favorite. These buntings love birdhouses and will gladly eat almost anything delicious you have to offer them. They also prefer nesting in small birdhouses located 4-8ft from the ground and have a song that will bring cheer even to the darkest days.