The main flyways of North America are routes that are followed by migratory birds in large numbers. While some of these routes can easily be traced, others can be complicated to follow. There are currently four main flyways, however, no two species will follow the exact same path, from start to finish. In general, bird migration is thought of as north to southbound movement, with a heavier concentration of birds flying following the principal river valleys, mountain ranges, and the coasts. The greater routes of migration do closely conform to major topographical features that lie in the same direction of the travel to be performed, which is why they have been categorized in four main flyways that border hundreds of migration routes all over the country. Essentially, the flyways should be looked at as major highways used at some point or other, by most species of migratory birds.

What You Can Do to Help Birds During Migration

You can supply any migrating birds with fresh food and water, and the best bird house to roost or nest in. If you decide to do so, it’s important that you do everything correctly, feed them a well-balanced diet, and do everything possible to keep them healthy. When you add a fresh water source and a bird feeder to your yard, you’re creating a stopover station for many exhausted and starving migratory birds. But without proper care and upkeep, this means that you’re also creating a place for predators to gather, and you will increase the chance of disease, and food-borne illnesses, which is why it’s so important that you ensure the area is clean, the food is not spoiled or moldy and that the water is fresh and clean.

If you’re concerned about predators, providing adequate protection and shelter is a must. This will be especially important if you have feral cats in your neighborhood. This same type of protection will also hide any smaller birds from birds of prey. You can easily protect a feeder by placing it in a heavily leafed tree or by a dense bush, both of which provide a nice hiding place for feeding birds.

Ensuring the birds have a clean water source will also be important. Dirty water will be a breeding ground for fungus and bacteria that can harm birds. The water should be changed out every other day to prevent bacteria and fungus growth. For food, inspect any birdseed and look for signs of spoilage or mold growth. If you’re using hummingbird feeders, then the nectar should be changed every couple of days since it’s prone to spoilage. The bird feeder should also be cleaned out to ensure no bacteria remains to ruin the next batch of nectar. To learn more, click here to read my article on how to clean a hummingbird feeder.

During migration, birds that travel along these flyways are in constant search of food, water, and other resources. While some birds are able to fly straight through to reach their wintering destination, many birds must stop along the way to refuel and rest. This is where you can help. Providing fresh food, water, and a clean bird house or some type of dense coverage, can ensure the survival of many species of birds that will travel through your yard during their annual migration.

Now, let’s learn more about the main flyways these migratory birds use. 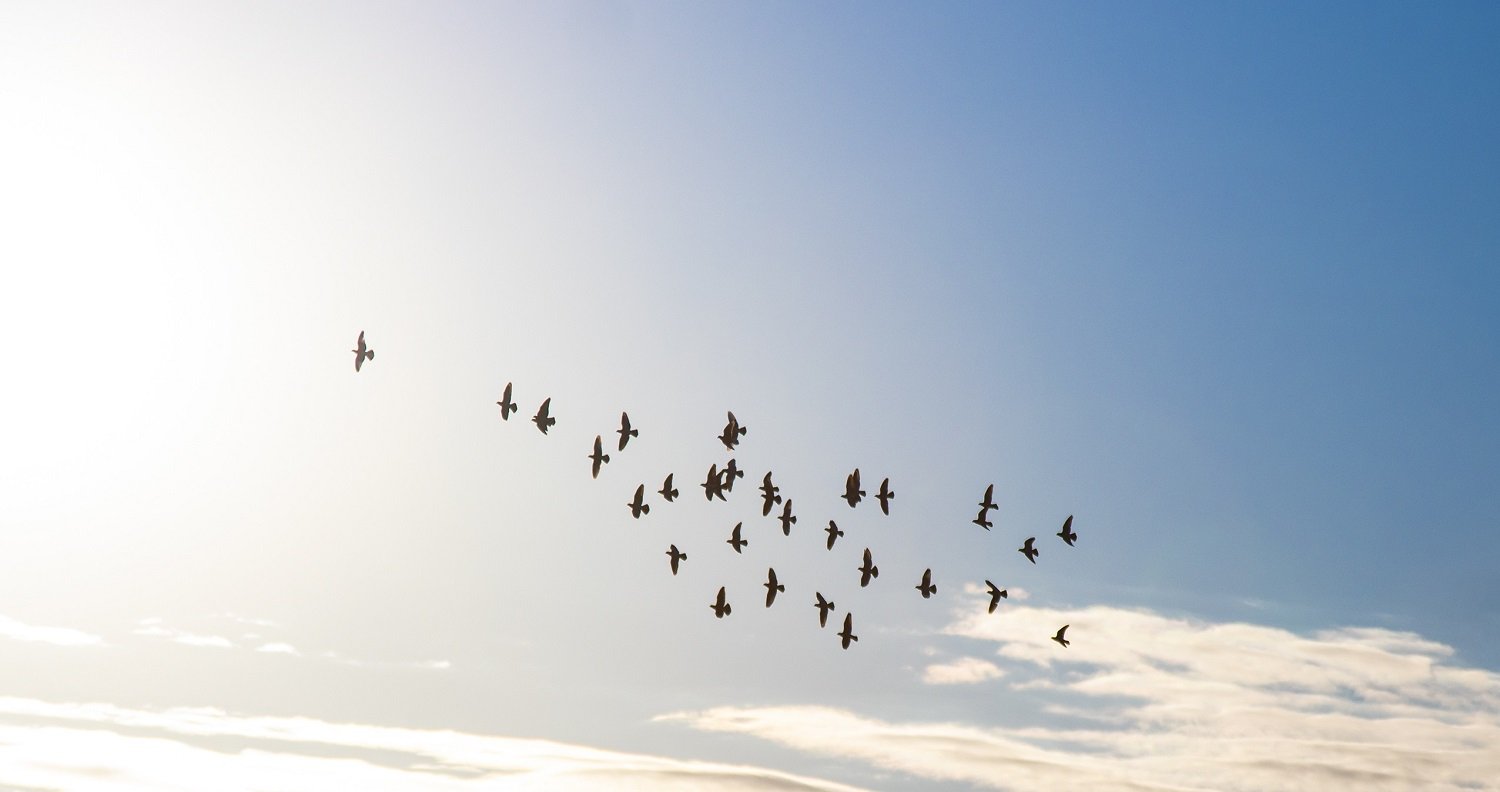 The flyways consist of geographical areas that are used by migratory birds during migration. Many birds will migrate to find a warmer place to live during the wintering months of a much colder climate. Other species will migrate during breeding season in order to find ideal living conditions, a safe habitat, and plenty of resources. Many birds will travel the same route every migratory season and will even stop and visit some of the same yards that they do each year during migration.

As I mentioned above, there are four major flyways in North America:

Along the southern and northern breeding grounds and the coasts, the flyway boundaries aren’t as sharply defined.

This flyway is described as extending from the offshore waters found on the Atlantic coast, which is west to the Allegheny Mountains. The flyways continue toward Northeastern Ohio and Northern West Virginia, across the prairies of Canada and to the Northwest territories of the Arctic Coast of Alaska. The Atlantic flyways encompass many of the main migration routes, some of which are branches from the main routes of other flyways. This route from the Northwest is very important to waterfowl and other species of birds such as redheads, canvasbacks, and other species that winter in the marshes and in the waters of Delaware Bay. On the coastal route of this flyway, the shoreline is followed. Alone this route, many birders can take advantage of the numerous prime sighting spots of migrating waterfowl and land birds.

In the fall, some shorebirds that are nesting on the arctic tundra will fly southeast across Canada, to the Atlantic coast, following this flyway to the mainland of South America. In the fall, many species of birds that breed east of the Allegheny mountains will move southwest, in a direction they maintain from northwestern Florida, to cross the gulf of the coastal regions of Mexico where they have a land route for the remainder of their journey.

This simple flyway is mainly used by migratory waterfowl. The flyway’s eastern boundary runs through southern Ontario’s peninsula on to Lake Erie. It then moves southwest across Ohio, all the way to Mississippi. The boundary on the west doesn’t have a very precise definition like the eastern boundary does. Because of this, the western Missouri, eastern Nebraska, and the Mississippi and Arkansas flyways imperceptibly merge into the central flyway. This flyway is essentially one large funnel, with the bowl of the funnel extending up and out from the intersection of the Missouri and Mississippi Rivers, with the narrower part following Mississippi toward the Gulf of Mexico.

This flyway runs along the eastern side of the Rocky Mountains, via Canada, all the way to Southern Colorado. It then moves over Oklahoma and eastern Texas, continuing down the Gulf of Mexico. A smaller, second artery of the route follows the western side of the Rockies, intersecting with Northern Texas. This flyway was formed back in 1948 and consists of states including North Dakota, South Dakota, Nebraska, Kansas, Oklahoma, Texas, New Mexico, Wyoming, Montana, and the Canadian provinces of Saskatchewan and Alberta.

This flyway hugs the coast of the pacific with a migration route found along the western artery of the central flyway, as it intersects with Oregon, California, and the California and Mexico border. Along this route, birds will find stopover sites including wetlands, which make for a suitable place to rest and load up on fresh food and other important resources. These wetlands will be home to wintering birds, such as ducks, geese, and waterfowl. The vegetation and open water in the wetlands provide food, and plenty of cover for shorebirds and waterfowl. On the pacific flyway, the central valley is the most important spot for any wintering waterfowl. This spot supports approximately sixty percent of the total migrating population that utilizes this flyway. 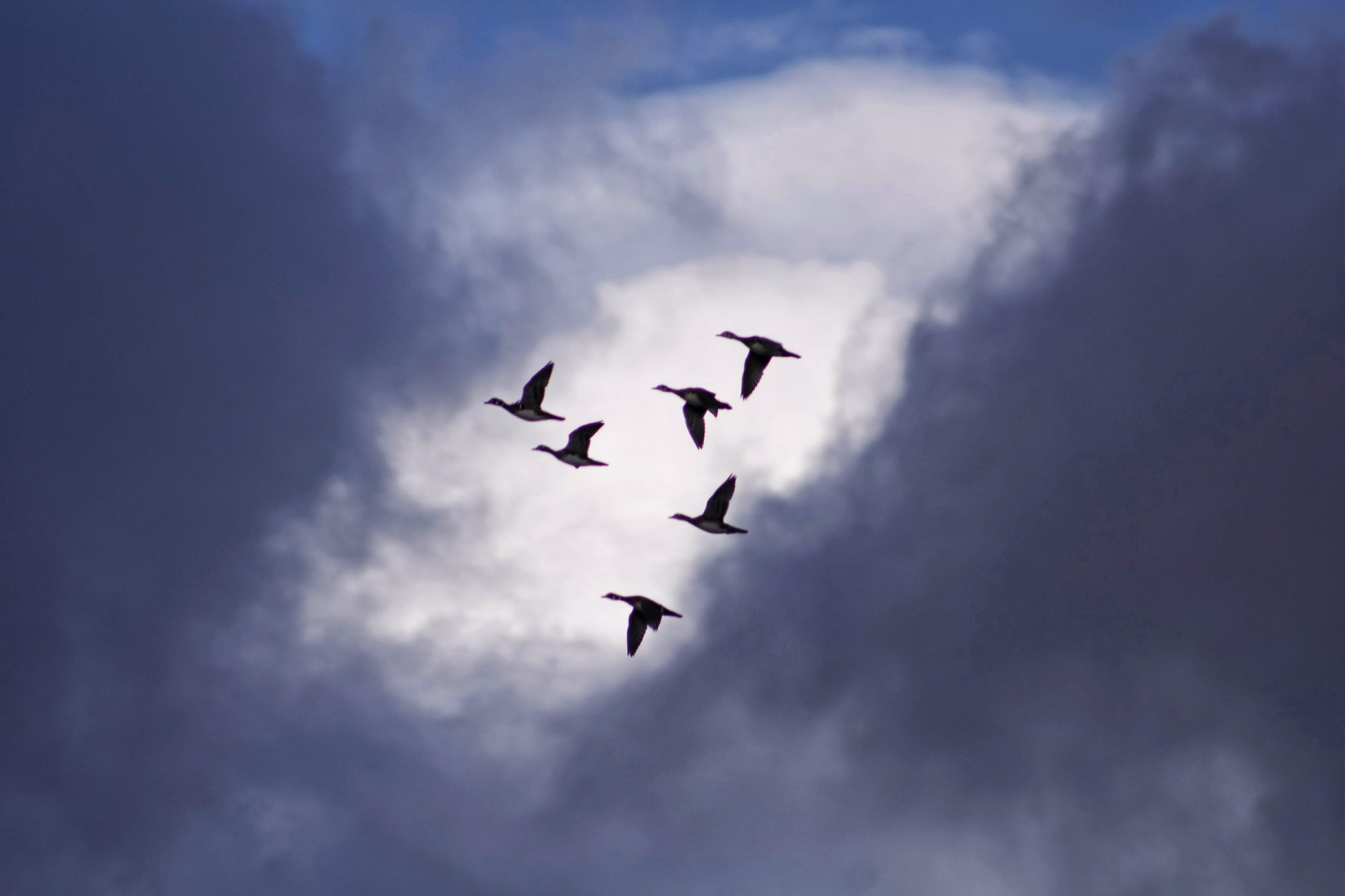 Based on each route, these flyways were established to facilitate the management of migratory birds, in addition to their habitats. Each of these flyways has a council that consists of representatives from each territorial agency, province, and state that’s found within each particular flyway. A flyway technical committee advises the council. This technical committee consists of biological staff and their job is to evaluate the habitat and population, making recommendations to the council members, regarding migratory bird conservation.

In 1918, the passing of the Migratory Bird Treaty act resulted in a focus on bird migration that led to improved methods for banding and trapping, and allowed the committee to create a record-keeping procedure that would make it easier for researchers and biologists to keep track of the migratory bird population. By establishing these four routes for annual migrations, it was also possible to regulate and manage the hunting of migratory birds. Once the population size was estimated by researchers, protection was put in place for many species of migratory birds, including many species of waterfowl.

Facts About the Flyway

The main flyways of North America are used by thousands of birds every year. While a bird will not use these flyways for the entirety of their trip, each bird’s migration route will in some way, intersect with one of these major flyways during their journey. These flyways were established to help with bird conservation efforts in America, allowing researchers and biologists to keep a closer eye on habitats and food resources, while also assessing the population of birds that migrate each year, which helps biologists to learn more about population growth and decline.