The northern red bishop is a type of small weaver finch with a vivid red body and black belly. The wings, bill, and face are brown with a head that has a black crown. The red upper tail extends over the bird’s short brown tail. This species is native to sub-Saharan Africa and is formerly known as the orange Bishop. In 2016 the name was officially changed by the American ornithologist Union. Considered one of the most beautiful birds in the world, many birders remain fascinated by this elegant and highly intelligent bird.

The northern red bishop is an African finch best known for the male’s habit of making intricate dome nests. These birds are also known for their impressive displays used to attract potential mates. They can be found south of the Sahara Desert, north of the equator.

These birds tend to nest in large colonies and will usually forage and roost in flocks together with other members of their family.

These birds prefer to roost in open country, especially tall grasslands that are situated close to water.

Did you know that the red bishop is actually a common bird in the American pet trade? Wild populations originating from escaped birds are thriving in California and are also commonly found in urban Phoenix. The rare sighting of the wild female stumps experienced birders who are not expecting to see an African species in their neck of the woods. These birds are commonly mistaken for grasshopper sparrows due to the rarity of the red bishop in the United States.

These birds are sparrow-sized finches that are rather stocky measuring in at little under 6 inches in length including its tail. Males are typically significantly larger than the females. 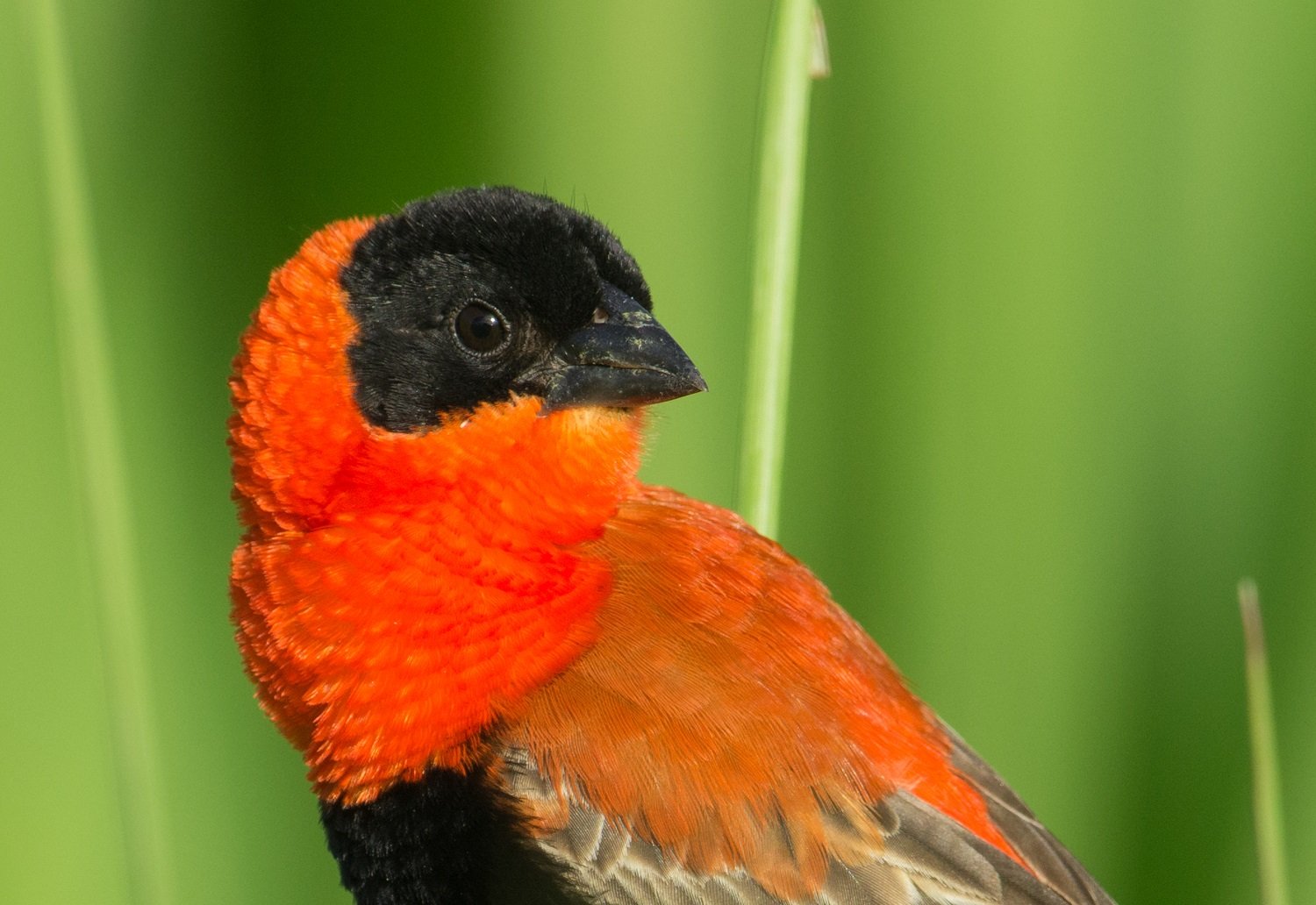 These birds have a couple of color phases depending on the season.

The breeding male has plumage that is Scarlet with the exception of its waistcoat and black head as well as the brown tail and wings. The bill is black and thick. The females are smaller, yet similar in color.

The birds’ distinctive red feathers come from pigments that have been derived from compounds found in their food. The red, orange and yellow pigments derive predominantly from diet-dependent carotenoids.

The plumage for the non-breeding male is much different and is a very pale brown-yellow that’s streaked with white.

The juvenile has plumage that’s very similar to the non-breeding females and males, with the exception that they have pale wider fringes.

This species of bird will mainly eat grass seeds, but it’s also been known to eat insects. Millet seeds are considered a treat for these colorful birds. They’ve also been known to feed on the cocklebur species. In early spring many of these birds have been sighted visiting bird feeders. However, they more commonly forge stems on the ground or within weeds and grass which is also where they can catch insects.

In captivity, these birds should be fed a good quality seed mix that includes red and yellow panicum, millets, and canary seed. Sprouted and soaked seeds will provide much-needed nutrients. Additionally, they enjoy a variety of live foods including moths, termites, small cockroaches, grasshoppers, and crickets. These foods should be made readily available during their nesting period. A non-breeding male or female is usually less interested in live food options. Some leafy green veggies and some fruits can also be offered as well.

The length of the breeding season will depend on the start or the end of the rainy season. Females often provide all the parental care for the offspring, including feeding and incubating.

The male will not forage for their offspring, yet they spend a significant amount of time creating the nest itself.  The nest is usually created from a variety of reeds and grasses found within the marsh vegetation and is incredibly durable.

The amount of time that fledglings will spend in the nest can range anywhere from 14 to 16 days, while the breeding season itself ranges from the beginning of early May to the end of November and can last anywhere from 2 to 6 months.

The best time of day for birdwatching the red bishop is early morning when you can find it hard at work. The male’s unique mating behavior involves creating beautiful nests. These nests are often suspended between corked dry brushes and reeds or a couple of branches on low shrubs or trees. The male will make use of grass-type plants that are growing in the surrounding environment in order to weave nests or they will strip ribbons of foliage.

While the male is building a nest, he will also perform an interesting display flight, fluffing his feathers to attract a female. Once a female catches his eye, he’ll concentrate on that particular bird, abandoning other interests. The female will settle down with her chosen nest, personalizing it by lining it with feathers, plant material, and soft grasses.

During the mating season, the male will mate with several females. A healthy male can mate with as many as three to four females. However, considering that the males do lend a hand in raising their brood, mating with two females per season is more common and manageable for these busy fathers.

On average, a clutch will consist of three to four pale aqua blue eggs which should be incubated for a period of two weeks. Females can produce an additional clutch during a favorable season. While females will do most of the brooding, the male will also help. The juveniles are able to leave the nest once they’ve reached 3 weeks of age and are independent for a period of an additional 3 weeks.

These birds do not do well in cages and fare better in planted aviaries that include the best birdhouses. Flight cages are another alternative and should contain leafy shrubs and tall grasses in addition to miniature or potted bamboo. This will provide the males with the materials they need to work with in order to weave a nest. These flight cages are large enough to allow these birds to stretch their wings and can provide them with adequate exercises. In the right conditions, these birds are generally considered easy to care for and can be a true pleasure to watch.

The Northern red bishop is one of the most beautiful birds in the world. Known for their interesting mating behaviors and complex nest building skills, bird identification is very simple. Additionally, since their introduction to America, they can be a rare treat to sight, especially in states such as California. These gentle birds can really stand out in the wild and will allow the avid birder to finally check off sighting one of the most vividly colored birds found in Africa. Additionally, due to their gentle nature and mild personalities, these birds are fairly low maintenance when kept in captivity and can be relatively simple to care for, if kept in the right environment, such as a flight cage or aviary. Overall, these birds remain one of the birder’s favorite birds to sight, not just because of their vivid plumage, but also due to their graceful flight, and friendly calm nature.

Food Scraps that Birds can Eat