April 20, 2022
BirdingRocks is supported by its readers. If you buy through our links we may earn an affiliate commision. Learn more.

Do you admire beautiful birds and love to learn more about them? Today we will share everything about the breath-taking Scarlet Tanager from the birding world! The Scarlet Tanager is one of the most strikingly gorgeous birds in North America. With its bright red body and jet-black wings, it’s hard to miss this species if you’re lucky enough to see one.

They are one of the few songbirds that are truly red, mainly due to the presence of carotenoid pigments in their diet. The male has a black head and wings, while the female is mostly yellow except for her red wings and tail.

Another stunning looking red-colored bird is the Northern Red Bishop. Considered one of the most beautiful birds in the world, many birders remain fascinated by this elegant and highly intelligent bird. You can learn more about them here.

Scarlet tanagers are about the size of a robin, with a length of about 8 inches and a wingspan of about 12 inches. They have strong, sharp claws for gripping tree branches as they forage. Scarlet tanagers are sexually dimorphic, with the male being much brighter in color than the female. 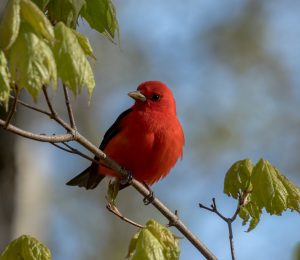 Difference between Male and Female:

The male Scarlet Tanager is one of the most remarkably appealing birds in North America. With his brilliant red body, pitch-black wings and tail, and snow-white chest and belly, he is a sight to behold. The female is much less showy, being a mostly greenish-yellow color with some red on her wings and tail.

Scarlet tanagers breed in eastern North America, from southern Canada to as far south as Mexico. They typically nest in deciduous trees, making a deep cup-shaped nest out of interwoven twigs. The female lays 3–5 eggs, and both parents care for their young.

Scarlet tanagers typically return to their breeding grounds in late May or early June. They typically build their nests in about two weeks, and the eggs incubate for 11–13 days. Females lay an average of 4 eggs but range from 2 to 6 eggs,  and fledging takes place in 16 days. The male brings food to the female while she is incubating and brooding the young. Furthermore, the male typically retains the primary role in feeding the young birds.

Scarlet tanagers are mostly insectivorous, but they will also eat fruit and nectar when they can find it. They forage in trees and shrubs, catching insects by flycatching or gleaning them from the leaves. They forage for food by perching on branches and scanning the tree canopy and understory for prey. In the summer, they primarily eat insects such as beetles, caterpillars, grasshoppers, and spiders. In the fall, they eat a wider variety of fruits, including blackberries, cherries, grapes, and hackberries.

The scarlet tanager, Piranga olivacea, is a migratory bird that winters in the tropics. It is common to see them in open deciduous forests and woodlands in the eastern United States. Scarlet Tanagers are summer residents of southern Canada and the northern United States, typically arriving in late April or early May and departing in early September. While they are present during the breeding season, they are not as easily observed because they spend most of their time in the treetops.

These birds are mainly found in deciduous forests and woodlands. They eat insects and fruit. The Scarlet Tanager is migratory, wintering in tropical areas. It is a very colorful bird, mainly red with black wings and tail. The Scarlet Tanager is the state bird of Delaware. Scarlet tanagers are uncommon to fairly common visitors to bird feeders. 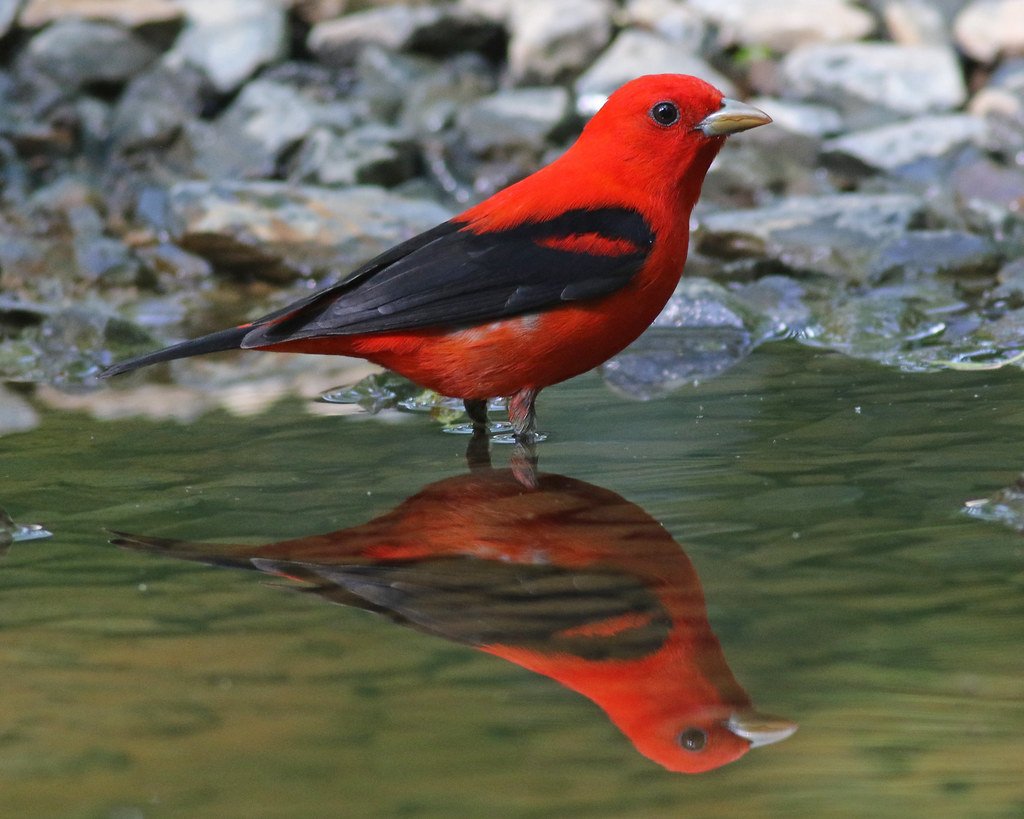 – The Scarlet Tanager is the largest member of the tanager family.

– They are monogamous, and the male helps build the nest.

– The Scarlet Tanager’s song is a series of high-pitched notes that fade in and out.

– Scarlet Tanagers prefer to live in mature forests with plenty of tall trees.

– They eat insects and other small animals, in which they can catch them flying in midair.

– Scarlet Tanagers are very vocal birds, and can often be heard singing from high up in the trees.

How do you identify these birds?

This article provided a comprehensive guide to the Scarlet Tanager. If you want to learn more about this beautiful bird, a variety of other species or anything else in the birding world, be sure to visit our blog often. Thank you for reading, we appreciate your support.  Happy Birding!