All birders have their favorite type of bird, whether it’s the blue jay, woodpecker, or sparrow. But there’s something about black birds that we find fascinating.

There are many birds that tend to fall into the black bird category, and while it’s true that there are several types of black birds, we’re going to focus on the most well-known species that you’ve probably seen in your backyard or neighborhood at some point. Of course, this will also heavily depend on what part of the country you live in.

There are many different types of black birds found all over the world. The most commonly in America include:

Aside from their obvious beauty, many types of black birds are known for their unique social behaviors or unusual intelligence. As an example, crows are known to strategize and team up in order to obtain food. Like all birds, their behavior in the wild as they interact with one another, forage for food, and raise their young, is fascinating and can provide hours of entertainment for the serious birder.

Keep on reading to learn more about each type of black bird, where they can be found, what makes them so unique, and which species have a reputation as one of the smartest birds in the world.

For some, certain black birds, such as the American crow, can be nothing more than loud, unwanted pests, but for the birder, these birds can be a true thing of beauty. Below, we’ll go over the top seven most common black birds that are found all over the world, how you can identify them and where they can be found.

The American crow is the most well-known black bird. They’re large, loud, and take charge once they locate a food source, scaring off the competition. Unlike smaller species of birds, the crow is very easy to sight. They can also be very entertaining to watch and possess a certain level of intelligence that allows them to easily outsmart other animals who are competing for food and even those humans who do their best to keep these birds out of their yard.

Currently, the numbers of American crows remains strong, however, due to the West Nile virus, some birders fear a major decrease in population.

The boat-tailed grackle is another large black bird. These birds are commonly found in America, along the Atlantic and Gulf coasts. Many birders consider the grackle to be the most beautiful of all the black birds found in North America. The grackle’s eye color depends on where they live. Those found in Florida tend to have darker eyes, while grackles located in the Atlantic coast, north of Florida, tend to have light gold eyes. Grackles found east of Louisiana also have light-colored eyes, while the grackles that live further west tend to have very dark, almost black eyes.

The double-crested cormorant is considered a pest by many humans. They can primarily be found in North America, in large numbers. These birds are commonly found around both salt and freshwater and often attract attention when they’re standing on docks or sidewalks, with their wings held high and spread out. The birds do this in order to dry their feathers more quickly. Despite the fact that many consider them water birds, their feathers are not waterproof because they have less preen than other water birds do, which is why their feathers can take a very long time to dry. However, scientists believe that because of this, the Cormorant is able to hunt underwater with more speed and agility.

Many people consider these birds pests primarily because they’re messy. In a breeding colony, their nests are located on the ground, which can result in a huge mess once these birds move on. Additionally, their fecal matter can actually kill trees.

The black tern is a marsh bird that’s very social, fascinating to watch, features broad wings, and a forked, short tail. Its wings have hints of a silvery gray, while the head and body are black. This bird will migrate in a flock that ranges in sizes of one hundred birds up to several thousands of birds. They are beautiful to watch in flight and are for the most part very quiet.

This elegant bird is also referred to as an anhinga, however, it’s more commonly known as a snake bird because when in water, only its snake-like head remains above the water. However, these birds, despite their size, can actually fly quite high in the sky for a long period of time, much like the turkey vulture.

The largest songbird, the raven can be found all over the world. This magnificent bird is quite the acrobatic flier and can be commonly seen performing somersaults and rolls in the air. These birds are very smart, which is one of the reasons they’re considered dangerous predators. Crows work in pairs when they’re raiding seabird colonies. One crow will grab chicks or eggs while the other bird distracts the incubating adult. These birds also have a unique personality and have been known to closely pay attention to the activity of humans. Their observant nature is also one of the reasons that some people find them a little creepy. 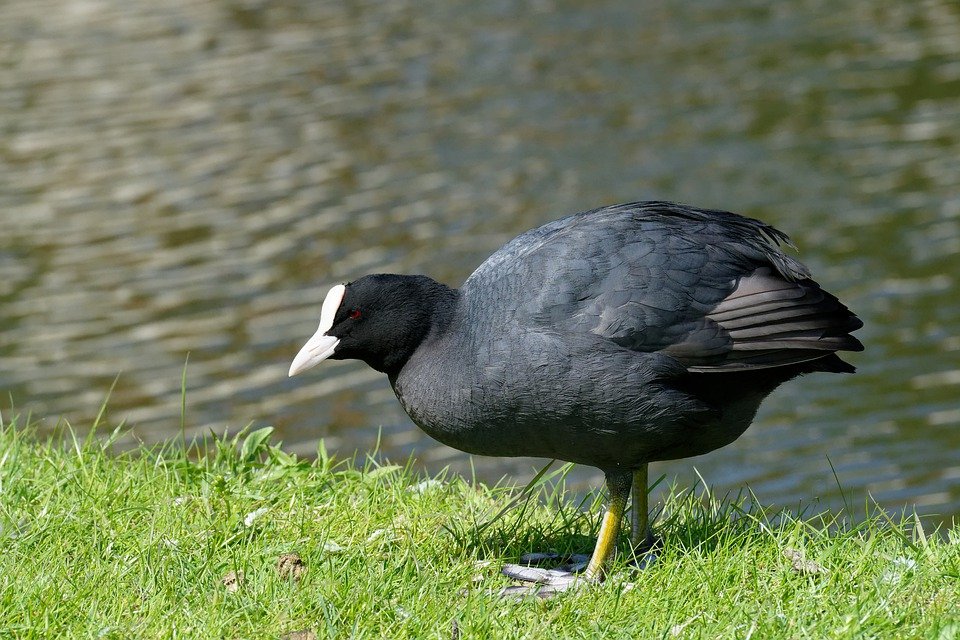 The coot eats, looks, and swims just like a duck. However, it doesn’t have the same webbed feet that ducks do. Each of their toes feature lobes located on the sides. These birds can be found in ponds and lakes, located along the edges or out in the water. They’re a fun species to watch as they forage in vegetation along the water’s edge or dive for their food.

How Can I Find a Local Birding Group?

If you’re new to birding, you may be surprised to learn that it’s actually a very popular hobby. However, if you’ve haven’t found any clubs or groups in your area, we recommend checking out Birding organizations across the USA where you can find lists of local birding groups, courses, and more, in your neck of the woods.

For some, this can be a matter of personal preference. But if you’re a beginner, we recommend using the best birding binoculars since they tend to be highly adjustable and more affordable than high-quality spotting scopes. We recommend the Nikon 7577 Monarch 5 Binoculars, which feature a lightweight design and come equipped with beginner-friendly features that make them easy to adjust and use.

As you can see, there are many types of black birds found all over the world, many of which can be spotted in your own back yard. These birds are often social, intelligent, and entertaining to watch, especially when it comes to foraging or hunting for food. Because of their coloring, they can also be an excellent choice for beginner birdwatchers who have difficulty sighting smaller species of birds.