Where Do Little Blue Penguins Live?

Where do little blue penguins live? These birds can be found in southern Australia and Tasmania, as well as the Chatham islands, and in certain parts of New Zealand.

The Life of the Fairy Penguin

Standing only sixteen inches tall and weighing in at two and a half pounds, these petite penguins are known for their beautiful blue feathers that are described as a mixture of slate gray and indigo blue. They’re born with a light brown colored plumage which will turn bluish-gray after the first molt.

For fairy penguins, the molting process lasts a total of sixteen days. In some parts of the world, their molting will begin in February or the second or third week of March. However, the molting time often depends on their location. Most penguins will lose approximately forty to fifty percent of the body mass during this process.

Do these birds feed at dusk? Not these penguins. They can usually be found at dawn, heading out to sea in search of food. Unlike larger species of penguins, the blue penguins perform shallow dives to catch their food, plunging into water that’s only twenty to thirty feet deep. They consume their food whole, just like other species of penguins and survive on pilchards, small octopus, krill, plankton, squid, and anchovies. On the sea floor, they will consume crustaceans, sea horses, and crab larvae. For the most part, hunting and fishing for this species of penguin are said to be easier due to their small size and the fact that their coloring allows them to blend in more easily with the water and surrounding environment, compared to other species of penguins. 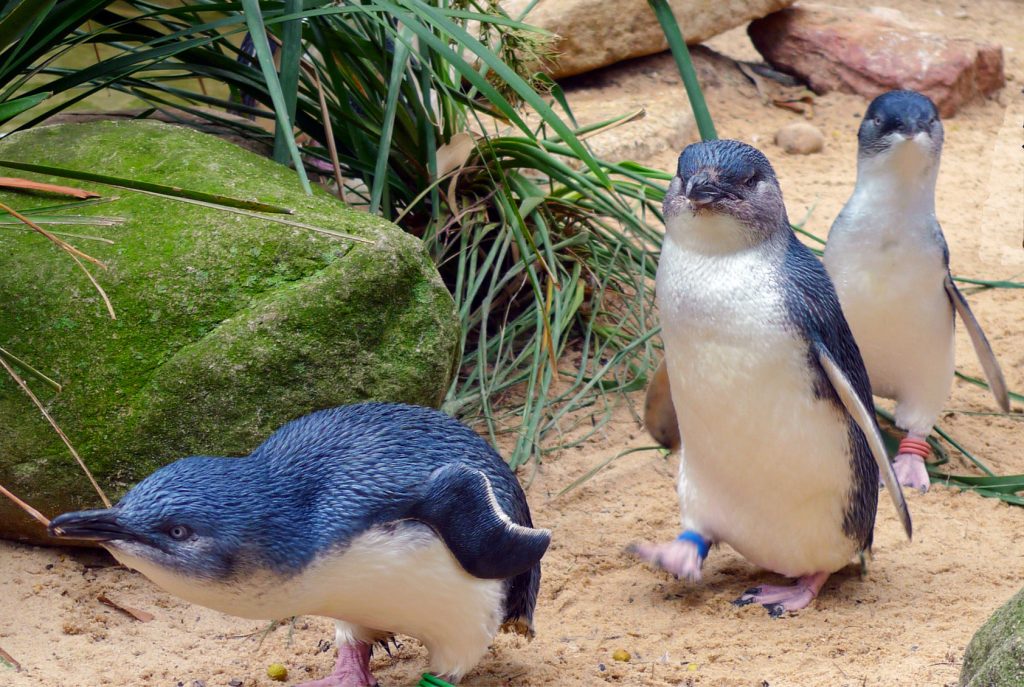 In terms of aggression, their behavior is considered unpredictable and very diverse. These birds will chase away intruders, violently attack anyone that threatens their family, or some may simply emit a verbal warning. These warnings usually consist of flapping their flippers and vocalizing their displeasure. An attack will often include several powerful beak strokes.  Since they’re not migratory they tend to stay close to home most of the time.

During the day, the fairy penguin will spend most of their time hunting in the shallow waters. As the sun goes down, the penguins will return to their rock crevice colonies or their burrow, both of which can be very loud especially right before dawn when the penguins gather to depart back out to sea to search for food.

The females tend to start breeding around three or four years of age. Scientists have not been able to pinpoint the exact breeding age for this species, although most species of penguins will begin to breed between three and five years of age.

Once the female has matured she will head to the breeding colony in early June. Upon arrival,  she is met by several males who perform a variety of complex courting displays.

June through August is the peak egg-laying time. The fairy penguin will lay one to two eggs at a time. Depending on the availability of food supplies, these eggs can take four to five weeks to hatch.

The penguins can have one to three clutches per season. Their nests are commonly found in sheltered areas such as rock crevices, however, if the penguin is unable to find a suitable rock crevice den they will dig a burrow instead. Most penguins will mate for life. Both the female and the male penguin will care for and incubate the eggs. Both parents will also care for their young once the eggs have hatched.

During the first month, their young must be constantly tended to. Over the next several weeks, both the male and female will provide only regurgitated food. After the first month, the fledglings will be ushered out of their nest where they will learn how to fend for themselves and practicing fishing and swimming.

In the water, these penguins must face predators such as killer whales, seals, and sharks. Land predators include large gulls and sea eagles. They must also be alert to man-made hazards such as fishing nets, plastic, and oil spills.

How Many Blue Penguins are Left in the World?

Currently, there are around three to six hundred thousand of these birds left that are of breeding age. It takes these penguins three years before they’re ready to breed. It’s unknown exactly how many of these birds are left since not all of the colonies have been located in Australia. This species is currently not considered endangered, however, it has been determined that some populations no longer breed at some of the previously discovered colonies. The reason behind this is not known.

These birds are considered the smallest of all penguin species. When they’re fully grown, they will only reach a little over two and a half pounds. They are blueish gray in color and have very soft, delicate feathers. Their plumage goes from their tail to the wings, their back and covers their entire head. They also have very dark gray feathers that are found across the cheeks and below the eyes. The belly, neck and their chest are a very bright white. They have small pink legs that have large, thick black claws that help them move over the ice and snow. Their beak is mainly white and very short. When hatched, the checks are a bright white and soft brown. The brown later turns to the bluish-gray color after the first molt. Because of their coloring, they can be very easy to sight during the day. I recommend using the best birding binoculars, the Celestron 71336 Nature DX 12×56 Binoculars. This pair will also perform well in certain low light conditions.

How long do Magellanic penguins Live?

While the blue penguins only live an average of six years, the Magellanic penguin can live to be twenty years old. Their first molt takes place during the first month of life. After molting, this penguin will leave the breeding site and stay at sea until the next breeding season. The females are able to start breeding at three to four years of age. However, the males will not begin breeding until they’re around five years old.

So, where do little blue penguins live? Most can be found in southern Australia and Tasmania. They can also be found on the entire coastline of New Zealand and on the Chatham islands. Their smaller stature and beautiful coloring are what makes them such as big draw for tourists. Their behaviors, diet, and even common predators can vary from place to place. Beautiful, graceful, and delicate, this species of penguin remains a birding favorite.

What is the Difference Between Torpor and Hibernation?